Minister for the Environment Phil Hogan has said the Department of Social Protection has put an emergency aid system in place to help those affected by a lack of food, clothes and accommodation as a result of recent flooding.

Mr Hogan said local authority staff are also going house-to-house to make damage assessments and that there would not be a delay to payments.

He said 15 people in Co Limerick have already received a payment.

The minister said that he said he would like to see a plan in place to spend €250m on flood defences over the next five years.

However, he said there is no quick-fix solution to the roll out of flood defences.

He said there are budgetary constraints and €50m per year for the next five years is all the Government can afford at the moment.

The Government’s emergency response group has said it is concerned about the rising river levels across the country.

The National Emergency Co-ordination Group met again today to discuss the severe weather that has gripped the country in recent days.

While it said the threat of coastal flooding had largely subsided, it expressed concern about rising water levels in the country's majors river, including the River Shannon.

A spokesperson for the Office of Public Works said the Shannon was a "particular source of concern" and it was being closely monitored.

Mr Hogan told RTÉ’s Six One news the country is in an era of finite resources and flood defence solutions are not going to be available for every area.

He said the Government’s co-ordination committee and the Office of Public works are looking at all areas on a case-by-case basis and that everything possible will be done.

He said the €25m in emergency aid for basic needs such as food, clothing and furnishings, is principally to give people in need assistance over the next few days.

Mr Hogan said there has been a difficulty in relation to businesses in vulnerable areas such as flood planes who, through no fault of theirs, are uninsured.

He said this is being looked at to see if they can be helped.

The National Emergency Co-ordination Group said this was not a national emergency and local authorities, along with gardaí and the HSE, were dealing with the flooding on a region-by-region basis.

Met Éireann meterologist Gerry Fleming told the briefing that the weather would remain the same over the next seven to nine days with more heavy rainfall predicted.

Meanwhile, a senior EU official said the Government should be able to access EU emergency funding for flood damage, even if it is not able to supply all of the relevant information within the ten-week deadline.

The official said Ireland can apply for assistance from the Solidarity Fund within the legal deadline, but inform the commission that they will submit additional information at a later point.

The clarification was given to Irish MEP Pat the Cope Gallagher, who had written a letter of concern to Regional Policy Commissioner Johannes Hahn.

Mr Gallagher had explained that Ireland was experiencing repeated bouts of storm surges, which were causing continuing damage, and he sought clarification about how the fund would approach the matter.

Commissioner Hahn's Chef de Cabinet Hubert Gamps said the ten-week deadline began when the first reports of flooding were logged and, in that regard, there was not "any flexibility".

However, he added that if the Irish authorities "are not in a position to finalise their total damage estimates within the ten weeks deadline ... they should nevertheless apply for ... assistance within the legal deadline."

Mr Gamps said the Government should explain that "they will submit additional, updated information at a later point, when this information will become available".

In a further indication that money would be made available, he said "the Commission has in the past accepted successive weather events of a related nature in a single application for Solidarity Fund".

He added: "This is all the more relevant in cases where damage occurs in the same areas and where it would be difficult if not impossible to say which part of the damage was caused by what event."

She said: "Commissioner Hahn said the threshold of this application for Ireland would be approximately €770m worth of damage."

Ms Harkin added that the commissioner had emphasised that "Ireland could use some of their Rural Development Funds or Regional Funds to help fund disaster relief".

She has now written to Mr Hogan and Minister for Agriculture Simon Coveney for their assistance in the matter.

Meanwhile, Taoiseach Enda Kenny has said Cabinet will present a report next Tuesday based on the assessment done on areas affected by the recent bad weather.

Mr Kenny commended the response of communities, emergency services and agencies, saying it was "first class".

Sinn Féin President Gerry Adams said the brave response of communities exposed "the lack of the strategic response of Government".

Mr Kenny said "not even the postman in Donegal could have predicted the tide would be 20 feet higher at the mouth of the Corrib".

He said an in-depth analysis on river catchments and weather changes was necessary. 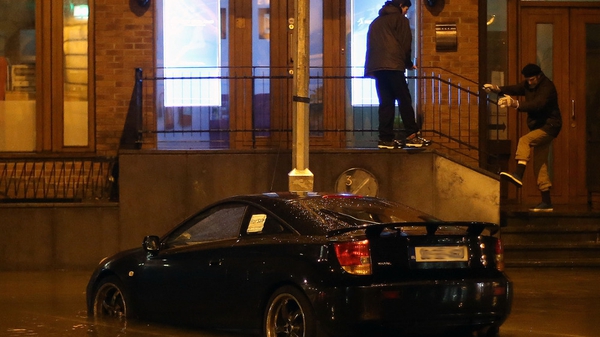