The Taoiseach has announced an additional €15m to help people affected by flooding.

Taoiseach Enda Kenny made the announcement in the Dáil this afternoon. It is in addition to the existing €10m in emergency funds and is direct Exchequer funding.

Mr Kenny said the fund was in place to deal with the immediate needs of those affected.

It is being administered by local authorities in conjunction with organisations on the ground such as residents' associations and St Vincent de Paul.

Mr Kenny said Minister for the Environment Phil Hogan and Minister of State with responsibility for the Office of Public Works Brian Hayes would be giving updates later in the week on the scale of the damage.

Mr Kenny said he would consider an application to Europe for assistance if that was appropriate.

Earlier, Minister for Public Expenditure and Reform Brendan Howlin said the Government's flood abatement strategy will have to be reappraised following the recent flooding.

The strategy will see the Government spending €250m on flood defences.

However, he said he is "fearful that these events could be part of a regular pattern" rather than a one-off.

The minister said there will have to be supplementary funding made available to help with damage and humanitarian aid.

He added that the Government "is exploring every avenue of support at European level to supplement our domestic supports".

Minister of State Hayes said there needs to be an honest debate about funding for flood defences.

Speaking on RTÉ's Today with Sean O'Rourke, he said: "The idea that we can protect every acre of land in the country is a lie and a pretence that has to be struck on its head".

Mr Hayes said he fully understands the anger of people affected by flooding in Limerick, but the important thing is to clean up the area as soon as possible to allow people to rebuild their lives.

The Government is still waiting for detailed costs of the flood damage caused by storms in early January.

Mr Hayes said local authorities around the country must submit details of what they need by today.

The Minister for the Environment will then bring those reports to Cabinet next Tuesday.

A spokesperson for Regional Policy at the EU Commission has said it is her understanding that Ireland will make an application for financial assistance.

Speaking on RTÉ's Morning Ireland, she said the official application does not have to be made until ten weeks after the storm damage occurs.

Ciarán Cuffe of the Green Party has called on the Government to engage in advance planning for flooding.

He said every local authority in the country needs to have flood-risk strategies and plans, so they can be prepared for extreme weather.

He called on Mr Hayes to look at allocating greater funding for flood defences, and said the Government should "rethink spending €100m on upgrading the road at Newlands Cross" in Dublin. 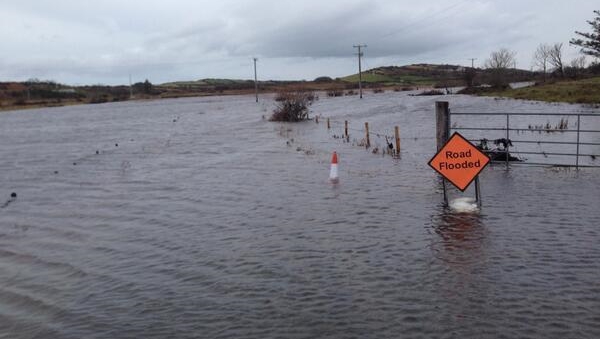 15,000 without power amid further flooding