At least 46 civilians have been killed, 33 in one neighbourhood, in barrel bomb attacks.

Syrian Observatory for Human Rights director Rami Abdel Rahman said at least 46 civilians "died in the bombardment of eastern areas of Aleppo city with explosive barrels", among them "33 civilians in the Tareq al-Bab area".

Meanwhile, Syria's foreign minister Walid Muallem has said his delegation have rejected a US request for direct talks unless US Secretary of State John Kerry apologises for his remarks at the Geneva II talks.

Mr Kerry had said in his opening remarks at the Geneva II talks that Syria's President Bashar al-Assad "will not be part" of any transitional government.

Mr Kerry had also said: "There is no way, not possible in the imagination, that the man who has led the brutal response to his own people could regain legitimacy to govern."

Mr Muallem also dismissed the "coalition of the so-called 'opposition'" in his comments.

He said: "If they do not abandon their illusions, they will get a rude shock because we are a country of institutions and a constitution and we have a president of the republic."

The regime and opposition were unable to bridge the vast gulf between them during 10 days of talks.

They made no progress on ceasefires, humanitarian corridors or the question of a transitional government.

The regime sought to focus the discussions on "terrorism", its term for the actions of all those seeking Mr Assad's overthrow.

Minister Muallem said it was "a stain" on the opposition that they refused to sign a declaration condemning "terrorism" in the country.

A second round of talks has been tabled for 10 February, with the opposition already committed to attending.

But Mr Muallem repeated earlier assertions that his team would await guidance from Damascus before announcing whether it would participate.

More than 136,000 people have been killed in Syria since the beginning of the conflict in March 2011, and more than 2.4 million Syrians have become refugees.

Mr Kerry met Russia's Sergei Lavrov on the sidelines of the Munich Security Conference to discuss what Washington considered to be "unacceptable" progress in moving Syrian chemical weapons.

A senior US State Department official said: "Secretary Kerry pressed Foreign Minister Lavrov to push the regime for more progress on moving the remaining chemical weapons within Syria to the port in Latakia."

Syria has reportedly given up less than 5% of its chemical weapons arsenal of roughly 1,300 tonnes of toxic agents and will miss next week's deadline to send all toxic agents abroad for destruction. 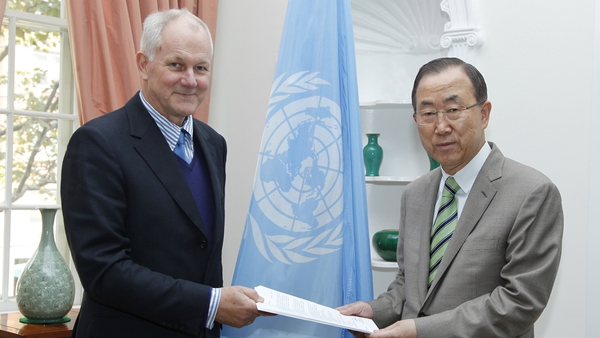