The last baby has been born at Mount Carmel Hospital in Dublin on the day that 200 staff members have been made redundant.

Another 128 staff will lose their jobs over the coming weeks.

Staff attended a mass this evening to mark the closure of the hospital.

Afterwards, around 20 staff members said they were planning a sit-in at the hospital.

The provisional liquidators confirmed that 572 maternity patients have been affected since the hospital went into liquidation last Friday.

Four babies were born today and the final arrival was a girl.

One of the grandfathers of the babies born today praised the staff and criticised the Government and Minister for Health James Reilly for failing to protect the jobs at the hospital.

Post-natal services will remain available until all maternity patients have been discharged by next Thursday.

The liquidators' helpline for patients affected by the closure has received 720 calls.

Minister for Justice Alan Shatter said the manner in which staff at Mount Carmel were treated was "brutal".

Mr Shatter said the Government had no idea a liquidator was going to be appointed and that the first he knew of the development was last Friday.

Speaking on RTÉ's Today with Sean O'Rourke, the minister said he hoped Mount Carmel will be able to resume work as a hospital in the future.

He said: "I think the manner in which the staff have been treated has been brutal.

"You had individuals in the operating theatre last Friday doing very serious operations being told that the hospital was being put into liquidation."

Around 2,300 public patients have been referred to Mount Carmel for treatment, but less than half have actually been treated yet.

The original public hospitals that referred those patients are trying to reschedule their appointment at alternative facilities.

Around 900 private patients per week were being treated at the hospital.

Mount Carmel, which has been in liquidation since last Friday, has debts of over €35m.

Staff have been told they will be paid statutory redundancy, but may have to wait six months before they receive it. 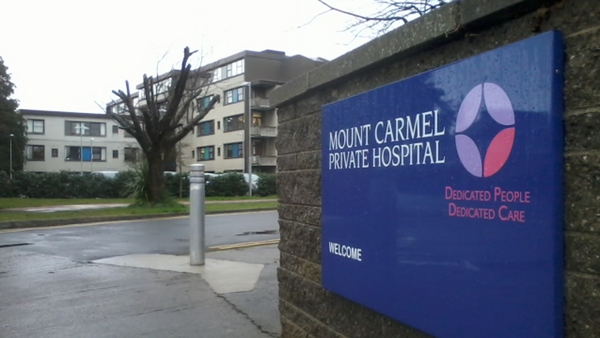