The Department of Social Protection is organising staff to attend Mount Carmel Hospital over the coming days to advise them on how to claim their statutory entitlements after the hospital closes on Friday 7 February.

Earlier, RTÉ News disclosed that the 328 staff losing their jobs will have to wait between six weeks and six months for their entitlements to statutory redundancy payments, as well as monies owed for holiday pay, sick pay, and minimum notice.

The department said that "correctly submitted online applications" for statutory redundancy are currently being decided "well within" the target processing time of six to eight weeks.

However, an application is not valid until a signed form is also received.

Other outstanding employee entitlements such as wages, holiday pay, sick pay and payment in lieu of minimum notice can be paid out under the Insolvency Payments Scheme.

However, it is taking between five and six months to process such claims.

The Department of Social Protection spokesperson said they will have advisors on site at the hospital to advise staff on making the claims.

The department also confirmed that the Minister for Social Protection becomes a preferential creditor in the liquidation in respect of payments under the Insolvency Payments Scheme and statutory redundancy lump sum payments.

Statutory redundancy amounts to two weeks of pay per year of service, capped at €600 per week.

Employers used to receive a rebate of 60% of the cost of statutory redundancy from the State, but that was gradually abolished by the Government over the past two years.

The last baby is due to be delivered at the maternity hospital on Friday.

The hospital will gradually wind down between then and 7 February.

Meeting between hospital unions and liquidator

Meanwhile, unions have urged the National Asset Management Agency to redouble efforts to find a buyer for the hospital as a going concern.

However, informed sources said there was little or no likelihood of such a buyer being found, given that the hospital had been marketed widely for up to 15 months before the liquidation.

Unions held another meeting with liquidator Declan Taite this evening.

SIPTU has called on the Government to engage with NAMA in an effort to secure the future of the hospital.

The union said it believes the facility in Dublin could still be sold as a going concern.

Spokesperson Paul Bell said the hospital's closure will have a real impact on other hospitals in the capital.

Speaking on RTÉ's Today with Sean O'Rourke, he said there is a clear need for Mount Carmel to remain open in order to free up beds in already overcrowded public hospitals.

He said patients have been moved to Mount Carmel from public hospitals for convalescence and rehabilitation to free up acute beds for other patients.

He said: "It is serving the public. And this understanding that it's only serving private patients is absolutely incorrect."

He also called on NAMA to take into account the cost to the State if the planned closure of the hospital goes ahead.

He said: "What has not been put into value is that fact that 300 people will lose their jobs this coming Friday.

"They will walk out of that hospital with no holiday pay and no redundancy. The State will have to pick every single cent of those payments up. This is also at a cost to the Irish taxpayer." 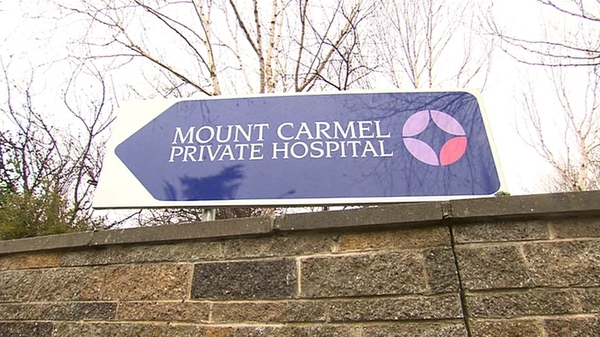 Last baby to be delivered at Mount Carmel on Friday