Taoiseach Enda Kenny has told the Dáil that he would like to see the remit of an expert panel examining EirGrid's overhead power lines extended to cover the North South interconnector.

Mr Kenny earlier met TDs from the border region who had pressed for the change.

Yesterday, the Government said there would be a commission to see if parts of the proposed networks in the southeast and north midlands could be put underground.

Minister for Energy, Communications and Natural Resources Pat Rabbitte said this evening he would ask the chair of panel to look at the North South interconnector.

Mr Rabbitte wants the panel to see if there is any work it can do to establish that the interconnector has been treated in the same way as the two other projects.

The commission, under retired judge Catherine McGuinness, was set up to examine the Grid Link and Grid West projects.

However, TDs are pressing for the body to examine the North South interconnector as well.

Mr Rabbitte stressed that planning work on the transmission line had been under way for ten years.

He said detailed studies had already been carried out on the project, which he said was critical and of strategic urgency.

Mr Rabbitte said any decision on whether the panel can look at the interconnectors is solely one for Judge McGuinness and her independent team.

The issue of pylons was discussed at the Labour parliamentary party meeting this evening.

There was support for the decision for the panel to examine the Grid Link and Grid West projects.

There were also queries about whether it will examine the North South interconnector.

He said: "I don't think anyone looking at the panel of experts would think they would be involved in spin. We are doing this responding to what we have heard from people and communities.

"One of the key things in consultation is you listen to people and respond to it."

Earlier, activists campaigning against the proposed location of hundreds of kilometres of overhead power lines described a compensation fund for those living along the route as an "insult".

EirGrid said €50m has been earmarked to pay up to €30,000 to homeowners living in the shadow of the proposed power lines.

Padraig O'Reilly of the North East Pylon Pressure group said: "Community gain for us is really an insult to the local communities.

"The taxpayer pays their electricity bill in one hand and they are handed some of it back by the Government."

Around 800km of power lines are planned across the country as part of a €3.2bn upgrade to the national grid. 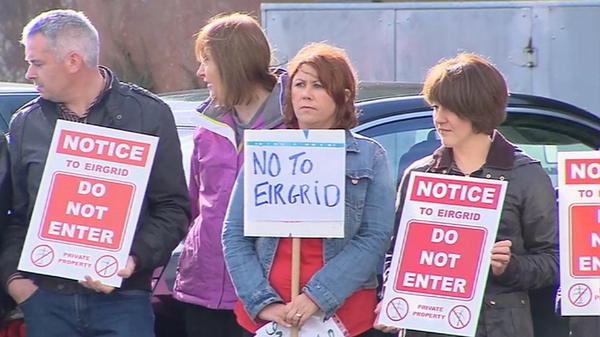 Govt to consider use of some underground cables for interconnectors