More than 300 staff at Mount Carmel Hospital in Dublin will lose their jobs after the directors of the hospital applied to the High Court for the appointment of a liquidator.

In a statement the liquidators said they "have taken court mandated responsibility for the operation of the hospital and will plan and manage an orderly full wind down".

They said: "All current patients in the hospital will be fully cared for in Mount Carmel.

"Obstetrics patients scheduled over the coming days will also be fully cared for in Mount Carmel. All of these patients will be contacted by phone to confirm these arrangements."

It said that obstetrics patients booked in for maternity services in the coming weeks and months will be transferred to alternative maternity hospitals.

A helpline and email facility has been set up to deal with queries from patients.

The National Maternity Hospital has said that is able to assist any women who wish to have their babies in Holles Street.

It said: "The hospital has been in contact with lead clinicians at Mount Carmel over recent months discussing contingency plans to be put into action in the event of this situation arising, and so while this is an emergency situation, it is not unanticipated."

The hospital also said the Mount Carmel consultants will be involved in the care of women.

Meanwhile, sources said that while there had been two bids for the hospital, both contained so many caveats that they were not acceptable and could have involved the risk of additional financial exposure for the taxpayer.

It is understood the hospital had been hit by changes in the health insurance market and the downturn in the economy.

There is no indication yet of what redundancy terms will apply.

SIPTU has expressed its concern about the decision to close the hospital. Union representatives met the liquidators this afternoon.

Minister for Health Dr James Reilly has said that while he regrets the imminent closure of Mount Carmel, the HSE is working to ensure patients of the hospital will have their care transferred to other maternity hospitals in Dublin.

Mr Reilly said there were no plans by the Government to turn Mount Carmel into a public hospital in the foreseeable future.

He said he did not believe there will be massive pressure put on public maternity hospitals in Dublin because the birth rate is dropping.

However, he acknowledged the stress that the announcement has brought on the staff and patients.

The minister was speaking at the launch of a new delivery suite at the Coombe Women & Infants University Hospital. 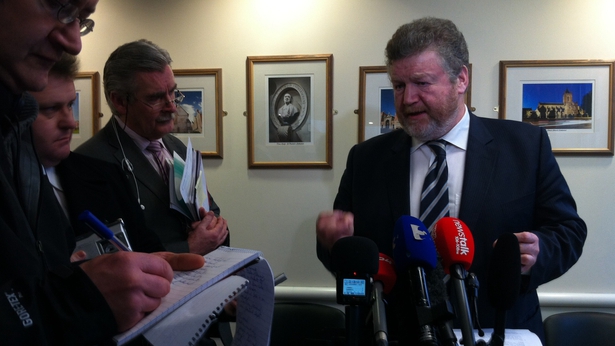 The Irish Nurses and Midwives Organisation has called on the Mr Reilly to personally get involved in trying to save hospital.

Speaking on RTÉ Six One News, INMO representative Phillip McAnenly said: "I'd appeal to the Minister for Health, James Reilly to get involved personally to try and save the 350 jobs here and to ensure patient safety and to ensure the capacity that is here for public patients would continue."

Mr McAnenly said he still believes that with some innovation and imagination it is possible to keep the 100 beds at the hospital open.

He said that for the next 48 hours the government still has a fully functioning hospital at their disposal.

Mr McAnenly said many of the 200 INMO members at Mount Carmel have 30 years experience and had been told today that elective surgery is being cancelled from tomorrow, and that the gates will close within two weeks.

He also said a large number of public patients had been transferred to the hospital in recent weeks to create extra capacity in public hospitals that are overcrowded.

Mr McAnenly said transferring these patients back into public facilities now is going to worsen an already impossible situation.

The company sought to be wound-up after what the court heard was "a disastrous 2013" and when NAMA decided it was no longer in a position to provide working capital to the company, which allowed the hospital to trade.

Judge Gilligan said he was satisfied to appoint the provisional liquidators after being informed that a plan had been put in place to protect, care and attend to the needs of the hospital's 230 patients, 60 of whom are in-patients at the private hospital.

Solicitor for the provisional liquidators, Jane Marshall, told the judge that looking after the hospital's patients was an "absolute priority" for her clients.

The court heard that the liquidators had worked on a plan with management at the hospital in advance of their appointment to ensure the patient's safety and well-being would be in no way compromised.

The court heard the hospital, which has been in existence since 1949, but was acquired by its current owners in 2006, has debts of more than €35m.

Its main creditors include NAMA, who in 2010 acquired a loan advanced to the company by AIB.

NAMA is supporting the application to have liquidators appointed.

Andrew Fitzpatrick, BL for the company, said that it had been able to trade in recent years thanks to funding provided by NAMA.

However, in recent days NAMA said it was no longer prepared to provide any more funds.

The company did not have the funds to continue to trade beyond next week.

The hospital was left with the option of either closing its doors immediately, which counsel said was "not an option", or having liquidators appointed who would ensure an orderly winding up of the business.

Counsel said NAMA is prepared to fund the liquidation and orderly wind up of the business.

The matter will return before the court early next month.

In a statement, NAMA said the Department of Health said last month that neither it nor the HSE proposed to enter into discussions with a view to purchasing it.

It continued: "Given that NAMA's primary objective is to obtain the best possible financial outcome for the taxpayer and given that the sale is not proceeding, NAMA has decided that it can no longer continue to fund unsustainable losses at the hospital."

Another private hospital, the Mater Private, has also warned that it is suffering adverse consequences from the changes to the health insurance market.

Management and staff engaged in negotiations at the Labour Relations Commission today over the hospital's plans to make 95 staff redundant and to close down the defined benefit pension scheme.