The Ukrainian authorities will have no choice other than to use force against protests if "provocateurs" do not stop inciting clashes, Prime Minister Mykola Azarov said.

He told Russia's Vesti 24 state news channel "If the provocateurs do not stop then the authorities will have no choice other than to use the force set out under the law and ensure the security of our people."

Earlier, Ukraine's President Viktor Yanukovych has warned that bloody clashes between protesters and police threatened the entire country as new fighting erupted in the capital, Kiev.

The clashes, the worst in Kiev in recent times, marked a spiralling of tension after two months of demonstrations against Mr Yanukovych's refusal to sign a pact for closer integration with the EU.

Amid growing fears the police could act to violently disperse the protest, Ukraine's Prosecutor General Viktor Pshonka warned protesters to halt "mass rioting", describing it as a crime against the state.

In a second day of clashes after 200 were injured in Sunday's fighting, thousands of Ukrainians braved sub-zero temperatures to take part in the standoff with police.

In the epicentre of the clashes outside the entrance to the iconic Dynamo Kiev football stadium in central Kiev, both sides hunkered down behind barricades.

The protesters lobbed stones dug-up from the cobbled road, flung Molotov cocktails and threw fireworks over a 20m no-man's land at police lines.

"I am convinced that such phenomena are a threat not only to the public in Kiev but all of Ukraine," Mr Yanukovych said in an address to the nation broadcast on state TV.

"I urge dialogue, compromise and calm in our native land," he said in his first public comments on the violence.

Showing increasing impatience with the events, he added: "I ask you not to follow those who urge violence, who are seeking to provoke a split between the state and society."

But even after his comments, some 10,000 protesters remained around the centre of the clashes, with the most radical using lasers to blind police firing stun grenades.

The burned-out wrecks of half a dozen police vehicles torched and destroyed the day earlier were used by the protesters as a barricade.

According to the Kiev health authorities, more than 100 protesters were wounded in Sunday's clashes, with four people sustaining serious injuries to eyes and limbs.

The interior ministry said more than 100 members of the security forces had been wounded, adding that 30 people had been arrested for mass rioting.

US-funded Ukrainian radio station Radio Svoboda said two of its journalists had been arrested yesterday morning while filming at the scene.

Opposition leaders, including former boxing champion Vitali Klitschko and Arseniy Yatsenyuk, appeared unable to have any influence on the hard core of radical protesters and stopped short of supporting their actions.

But Ukraine's jailed former prime minister and opposition leader Yulia Tymoshenko came out in support of those clashing with police, saying she would be with them if she could.

"Protect Ukraine and do not fear anything. Ukraine has no defence other than you. You are heroes," she said in a statement read by her spokeswoman to AFP.

New laws, which were rushed through parliament last week, allow for jail terms of up to five years for those who blockade public buildings and the arrest of protesters wearing masks or helmets.

Other provisions ban the dissemination of "slander" on the internet.

The laws were passed in a chaotic show of hands in parliament and then signed into law by Mr Yanukovych. 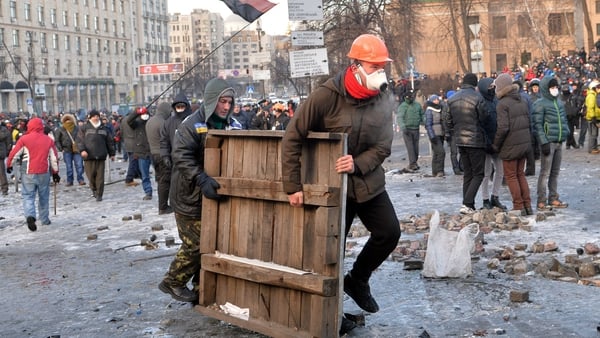