EU foreign ministers have spoke out about the violent protests in Kiev, saying the government was at fault for passing a package of repressive laws in an effort to tame pro-EU demonstrations.

"We have a situation ... which is acute and I think it very important that we react, particularly against the package of repression that was decided Thursday in Kiev," Swedish Foreign Minister Carl Bildt said.

The curbs on protests rushed through the Ukraine parliament were "the most solid package of repressive laws that I have seen enacted by a European parliament in decades," Mr Bildt said.

"I think what happened ... was a consequence of that package of repression," he said, referring to the violence overnight.

In Kiev, protesters were locked in a tense stand-off with security forces after hours of unprecedented clashes deep into the night left dozens wounded and parts of the city centre resembling a battlefield.

In an attempt to halt protests dating back to end-November when President Viktor Yanukovych ditched an integration pact with the EU under Russian pressure, the government rushed the curbs through but only sparked fresh outrage.

In response, Yanukovych set up a special commission which was due to meet opposition leaders Monday but it was unclear if these talks could ease the crisis.

British Foreign Secretary William Hague echoed many of his colleagues arriving for an EU foreign ministers meeting Monday as he called for restraint.

"I absolutely deplore the violence that occurred," Hague said, adding: "I believe it is a mistake to have" introduced the protest restrictions.

At the same time, he said "we welcome" the government's apparent willingness to talk to the opposition.

Ukraine is an important talking point at Monday's meeting as the EU prepares for a summit later this month with Russia.

EU ties with Moscow have been difficult and President Vladmir Putin is widely blamed for sinking the association pact with Ukraine, a former Soviet state, as part of efforts to undercut EU influence in Eastern Europe. 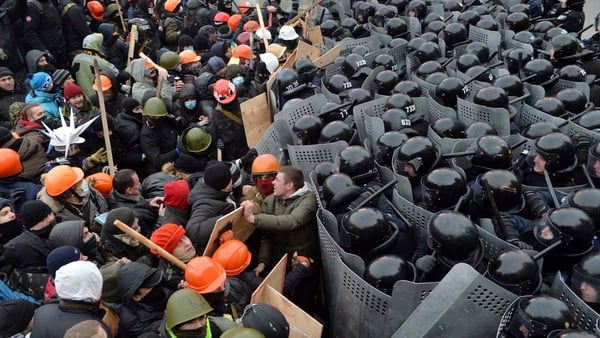 Image of the Day: Kiev Riots