The Taoiseach has said the retirement package paid to the former Chief Executive of the Central Remedial Clinic was appalling and indicative of a time in Irish politics that he hoped was long gone.

It emerged today that former CEO Paul Kiely received a retirement deal which amounted to more than €740,000, which is €542,000 above what was disclosed to the Public Accounts Committee last month.

The package was approved by the board of the CRC in February 2013, as Mr Kiely said he would be retiring.

Asked if he was surprised at the revelations, Mr Kenny said he thought the reaction from all of the members of the Public Accounts Committee spoke for itself.

At an event in Dublin this evening the Taoiseach was also asked if he was worried about the impression the public have about the CRC.

Mr Kenny said those who were dedicated to the organisation would be “simply appalled”.

Mr Kiely's package was the subject of a confidentiality agreement and was designed to meet pension and benefits had Mr Kiely remained as CEO until November 2016.

At the PAC hearing in December, Mr Kiely said he was paid a tax-free lump sum of €200,000, which was paid from the Friends and Supporters of the CRC.

The news of the extra amount emerged as another former CRC chief executive, Brian Conlan, appeared at the committee today.

The HSE's Director of Human Resources told the committee that it may be necessary to seek the assistance of the gardaí in relation to issues involving the Central Remedial Clinic.

Barry O'Brien said: "When we have all the full facts, we will take whatever steps are necessary to ensure that there is appropriate probity and governance."

He said if that included seeking the assistance from another statutory agency in finding what is the best way to proceed, then it would do that with the sole interest of the integrity of the CRC.

The HSE said the CRC must satisfy itself that the payments were in line with its Memorandum of Association and in the event of there being a loss to the CRC or the Friends and Supporters of the CRC, that this loss be made good.

The committee also heard that at around the time of the final payment, €700,000 was paid by the Friends and Supporters of the CRC that was described in the draft internal accounts as a donation.

The minutes of the Friends and Supporters of the CRC does not record an approval for this donation, which represents almost half its annual income, by the board of directors.

Mr Conlan said that he was unaware of these extra payments until today and was "alarmed and shocked" by the news, adding that it was wrong.

He said he was not at the board meeting that decided it, had not read the minutes of that meeting and was unaware of the confidentiality agreement.

Mr Conlan told the PAC that he was aware that there was a Visa card in the name of CRC Medical Devices, but said he does not know why there were payments made from that account to CRC staff members.

PAC Chairman John McGuinness asked what the payments were for and Mr Conlan said they were made for expenses such as entertainment and travel.

Mr Conlan also told the committee he was not in a position to be an effective witness when he was first asked to appear before the committee in December.

He resigned his post in December after the revelations over top-up pay for some staff funded from the CRC's fundraising arm.

He also told the committee that he was part of a preliminary process to recruit a new CEO, after Mr Kiely said in early 2013 he planned to retire.

Mr Conlan had earlier refused to attend the committee and was away on personal leave when the controversy broke.

Mr Conlan, who was a CRC board member for eight years, told the committee today he had just returned from his honeymoon in the US.

He said he was highly stressed by all that had transpired, particularly the tone and volume of the media coverage.

Mr Conlan said he had just tendered his resignation as CEO and was told he had no access to his files at the CRC.

He said his home was "besieged" by journalists for days, forcing him and his wife to leave the house for several days to maintain privacy.

Mr Conlan said he did not have the time or the resources to prepare adequately for an appearance before the committee, but when these circumstances changed he was happy to accept the invitation.

He said he wanted to assure the PAC that no disrespect was intended by his failure to attend.

The board of the CRC resigned after its appearance at the PAC in December.

Mr Conlan said he was sorry if there was anything that he did wrong in relation to the controversy over remuneration at the clinic.

He also said he felt the board of the Central Remedial Clinic should have resigned before he did.

Mr McGuinness said he did not believe the former CEO was giving the "full facts" about his knowledge of top-up payments.

He said: "It's hard to believe some of what you are saying ... the paperwork is being slowly dripped to us.

"You talk about the work being done by the CRC, but then you cause serious damage to the organisation.

"It's not acceptable and I want to see the full facts relating to the members."

Call for Kiely to pay back money

Vice chairman Kieran O'Donnell said Mr Kiely should pay back the payments he received in excess of his tax-free lump sum to the Friends and Supporters of the CRC.

Mr O'Donnell said what happened at the CRC was an affront to decency for the people "up and down the country" who were collecting money for the charity.

He said those people did not collect money to feather the nest of one individual, but had raised it for frontline services.

Mr O'Donnell said Mr Kiely should be asked to come before the committee again and that he should repay the money.

Sinn Féin's Mary Lou McDonald said Mr Conlan's credibility was "shot" and she said she did not believe he was telling the truth to the committee.

Independent TD Shane Ross described Mr Conlan’s answers as possibly the most unconvincing display ever before the PAC.

On RTÉ's News At One, he said Mr Conlan's claims that he did not know anything about the retirement package paid to Mr Kiely were utterly and totally unconvincing.

Mr Ross said that even if Mr Conlan had not attended the board meeting at which the payment was discussed, it was quite apparent that Mr Conlan must have been told by another board member that Mr Kiely had been given such a package.

He said Mr Conlan's answers do not carry any credibility at all.

Separately, representatives of the St Vincent's Healthcare Group are appearing before the committee this evening. 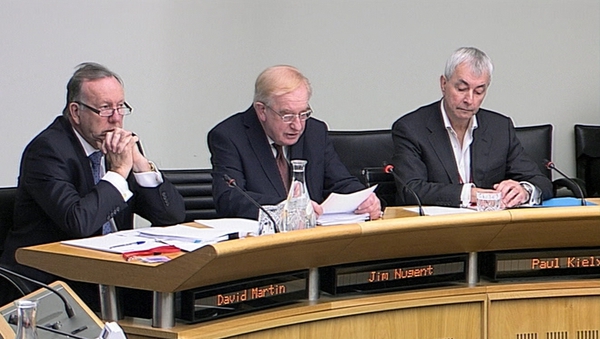