The Health Service Executive is to meet the chairmen and a board member of each of the voluntary agencies and hospitals who receive HSE funding tomorrow.

The HSE will present them with an annual compliance statement in which they will have to declare they comply with their statutory obligations in relation to pay, tax, finance, systems of internal control and governance.

The voluntary hospitals and groups will have until the end of the year to comply with the statement, which will form part of their service-level agreements with the HSE this year and every year after that.

The bodies that are not compliant with public pay policy will have to make a business case for doing do.

So far one organisation has made such a case to the HSE.

Today, the Oireachtas Public Accounts Committee heard a €200,000 pension lump sum paid to a former Central Remedial Clinic CEO came from the Friends and Supporters of the CRC.

The news emerged as senior officials from the CRC appeared before the committee to answer questions about top-up payments to senior staff.

Former CEO Paul Kiely also confirmed this afternoon that the payment he received was tax-free.

Asked how he felt about the funding, Mr Kiely said he had "qualms about everything to do about this", but there were also pension entitlement issues.

Chairman of the CRC Jim Nugent told the committee he would call a board meeting "in light of the discussion we have had today".

He said the board of the CRC is in discussion with the Health Service Executive about making changes to the board.

Mr Nugent said the organisation was contractually bound to pay salaries that were in excess of HSE levels.

He said the CRC had presented these arrangements at a meeting in July 2009.

David Martin, a director who was at that meeting, said the HSE agreed that the CRC was to pay the shortfall to those with "legacy contracts", who had been receiving pay in excess of HSE levels.

Mr Martin said it was also agreed that when such employees left, their replacements would receive a salary discussed and agreed with the HSE.

PAC Chairman John McGuinness asked Mr Nugent why Mr Conlan was not present, adding: "Perhaps you can enlighten us as to why he resigned?"

Mr Nugent said that "since he resigned last week, we have no authority over his decision".

"We have no way of compelling him to appear," he added.

Mr Nugent said he believed Mr Conlan thought there was a great intrusion on his personal life and that he would prefer to resign, given that he was only in the position of chief executive for a short period of time.

In a statement this afternoon, a spokesman said Mr Conlan had repaid any payment he received in excess of the HSE payscales.

He said: "During his five-month tenure, the chief executive's pay was set in excess of the HSE's pay scales for just three months.

"Mr Conlan has given a cheque payable to the CRC for the purpose of reimbursing the value of the net salary he received in excess of the HSE pay scale."

He said Mr Conlan understood that his salary was funded entirely by the HSE.

"He would not have agreed to being paid monies sourced from charitable public donations," the spokesman said.

It has emerged that Mr Conlan did some contract work as part of a small contract with Mater Euro Car Parks.

It was part of his own business following his retirement from the Mater Hospital and prior to him joining the CRC.

A spokesperson said this was for a short period and the contract ended in May 2013.

Mr Kiely claimed during the meeting that the CRC paid the Mater Hospital €666,000 for administering a fund that does not exist.

Independent TD Shane Ross described it as a "phantom fund" during questions about the CRC's association with the Mater Hospital.

Mr Kiely detailed how the €666,000 had been paid to the Mater last year as part of a long-standing arrangement between the two institutions.

However, the Mater Hospital issued a statement this evening rejecting the comments made by Mr Kiely.

Mr Ross said the CRC's annual report stated that "the Mater acts on behalf of the Central Remedial Clinic as an agent in the operation of the [pension] scheme and charges a fee of around 10-13% of relevant gross salaries, which amounted to €666,000".

He asked: "What do they do for that?"

Mr Kiely said the hospital administers the scheme. When Mr Ross asked what the total value of the scheme was, Mr Kiely responded that "there is no fund".

He said: "The VHSS [Voluntary Hospitals Superannuated Scheme] forms part of the income of the Mater Hospital. They charge us that for administering the fund on behalf of the members of the fund."

Mr Ross said: "But there is no fund."

Mr Kiely responded: "There is no fund that I know of. People that retire out of the VHSS are paid out of current revenue."

Mr Kiely confirmed that and said he challenged it, but "it was kicked out of the water ... I was told that it is what it is and it has to stay".

He agreed with Mr Ross that it was "outrageous".

Mr Kiely said the fund was set up facilitate staff a long time ago in the clinic to become members of the VHSS.

He said they were technically considered employees of the Mater Hospital at the time because the clinic was not recognised as a body eligible for the VHSS.

The Mater Hospital has said it rejects today's claims by Mr Kiely and has called on him to correct what it says is his "inaccurate reference".

It said: "The payment relates directly to the Voluntary Hospital Superannuation Scheme administered by The Mater Hospital on behalf of 181 staff members of the CRC.

"The liability for the pension payments to those CRC staff in the scheme will rest with the Mater Hospital in perpetuity."

Salaries and pensions under scrutiny

Mr Ross questioned the movement of €3m from the Friends and Supporters of the CRC to the CRC in the middle of last year to help fund pensions at the clinic.

He said it was "staggering" that lotteries and private funding was going to pay pensions and that the CRC was giving "two fingers to the HSE".

In response, Mr Nugent said he had the height of respect for the HSE and the taxpayer.

Mr Kiely said around 70 people would have been affected by any deficit in the pension fund, but he acknowledged that he was the largest beneficiary.

He confirmed that he was secretary of both the CRC and the Friends and Supporters company when the transfer was made.

Mr Nugent was also on the board of both companies.

He said the Friends and Supporters company was a stand-alone company, but did have a crossover of directors.

Mr Nugent said they had been looking at the issue of that crossover in recent times and had identified some independent people to come on to that board.

Mr Ross said the board had been protecting Mr Kiely and other people at the expense of the "Friends".

Mr Nugent rejected this and said 70 people had to be protected in the context of their pensionable rights.

It has emerged that the HSE wrote to the CRC on nine separate occasions this year expressing concern over the recruitment process undertaken to hire Mr Conlan as chief executive.

In letters seen by RTÉ News, it said the consideration of a former board member's application within an internal process was "highly irregular".

A letter sent on 26 June to Mr Nugent ordered the clinic to stop the recruitment process with immediate effect.

In July and August of this year, the HSE issued two formal warnings over the appointment process.

It also threatened to withhold funding from the CRC.

He said he was aware the HSE had taken issue with the size of the salary and asked the CRC board to reduce his payment.

"The board agreed and the revised pay scale came into effect from 1 October last.

"I have reimbursed the HSE for the value of the net salary I received in excess of their guidelines between July and September", Mr Conlan said.

Officials from the HSE and CRC are due to meet tomorrow.

A parent of a child who uses the services of the CRC has said families are horrified and disgusted at the controversy over top-up payments.

Ciara Nagle said there is a huge sense of disappointment and disgust from parents and staff at the facility and said she is very worried about the impact on services in the wake of the controversy.

She added that the facility's "Santa Bear" fundraising campaign has been badly affected.

"Santa Bears are being sent back from schools and shops because they can't sell them. It is detrimental to fundraising," she said. 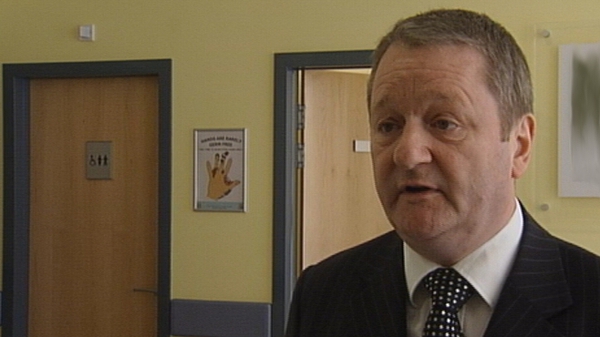