South Korea has rejected North Korean warnings to call off scheduled joint military exercises with the United States and vowed "severe" retaliation to any provocation from the North.

North Korea had urged South Korea to cancel the annual large-scale drills, known as Key Resolve and Foal Eagle, warning of an "unimaginable holocaust" if they went ahead as planned starting late February.

The Committee for the Peaceful Reunification of Korea (CPRK), a North Korean state body in charge of inter-Korean affairs, said yesterday that staging the exercises would drive the Korean peninsula "into catastrophe".

The joint South Korea-US drills are conducted every year and are routinely condemned by the North as rehearsals for invasion.

Reacting to the latest warning from the government in Pyongyang, South Korea's Defence Ministry insisted the exercises would go ahead as scheduled.

Mr Kim also said North Korea would be better off taking "positive steps" towards addressing global concerns over its nuclear weapons programme than lecturing the South on its military drills.

Last year's joint exercises were held in the wake of North Korea's third and largest nuclear test, and prompted months of escalated military tensions that saw North Korea issue apocalyptic threats of nuclear strikes against the South and the US.

But in a bizarre twist, North Korea later offered a Lunar New Year truce in hostilities, provocations and mutual criticism.

"We propose formally to the authorities of the South that on the occasion of the Lunar New Year holiday beginning on Jan. 30, both sides take substantive steps of halting actions that provoke and criticise the other," the National Defence Commission, headed by North Korean leader Kim Jong Un, said, according to the KCNA news agency.

North-South Korean ties are currently in a state of watchful limbo, with both sides voicing willingness to improve relations while accusing the other of lacking sincerity.

Earlier this month, South Korean President Park Geun-Hye called for the resumption of reunions for families separated by the Korean War.

But the North rejected the proposal, citing the planned South-US exercises as a major barrier.

There has been concern over the stability of the regime in Pyongyang after the execution of Jang Song-Thaek, a senior leader who was also the uncle and former political mentor of North Korean leader Kim Jong-Un.

The governments in Seoul and Washington have warned of possible provocation by the nuclear-armed North as it seeks to cement national unity following the purge.

The South's defence spokesman said "nothing out of the ordinary" had been detected in terms of military movement in the North, but added that Seoul was keeping "close tabs" on the situation.

The United States has based troops in the South since the 1950-53 Korean War and the force currently numbers 28,500.

To drive home its warning about the joint drills, the North's CPRK this morning faxed a formal note to the South's Unification Committee.

"We again urge your side to get back to your senses and stop the war exercises," the CPRK said, adding that Seoul would "be responsible for all consequences" if it ignored the demand. 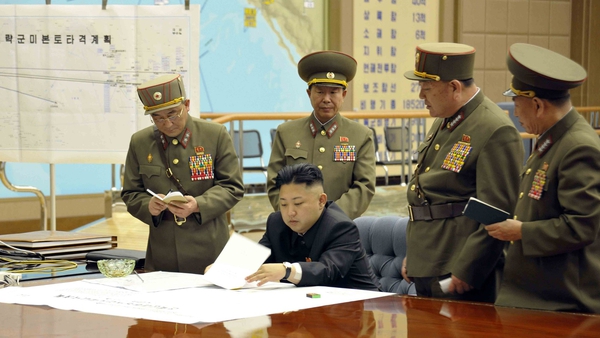