A €490m subvention from the Local Government Fund will be paid to Irish Water this year.

The figure emerged in the Dáil during questions to Minister for Finance Michael Noonan.

People Before Profit TD Richard Boyd Barrett asked Mr Noonan about the amount raised from the Local Property Tax (LPT) in 2013, the amount paid into the Local Government Fund and the amount allocated to Irish Water.

He also asked if he will provide some estimates for 2014 and the oversight mechanisms that have been put in place to ensure prudent use of these funds.

He asked the minister what he knew about LPT income going to pay consultants in Irish water.

He said receipts from LPT will remain in the Exchequer and LPT tax receipts were not part of the local government receipts for 2013.

However, Budget 2014 forecast €550m LPT receipts, and they will be placed in the Local Government Fund.

The Minister for the Environment manages, controls and authorises payments out of the fund.

Revised estimates from the Minister for Public Expenditure and Reform for 2014 show a €490m subvention from local government to Irish Water, Mr Noonan explained.

He said Revenue collects the money and the total LPT receipts are transferred to the Local Government Fund.

Mr Boyd Barrett said the minister seemed to be saying that he has no role in scrutiny of the €490m.

He said that when the tax was levied that the Government tried to neutralise opposition by saying it was going to local services, yet it is now going to the start-up costs of Irish Water.

He asked what oversight mechanisms have been put in place to ensure the prudent spending of LPT receipts in areas such as Irish Water.

Mr Noonan said that he has full responsibility as Revenue reports to him and then the LPT is transferred to the Local Government Fund, which the Minister for the Environment has the legal responsibility of administering.

Fianna Fáil leader Micheál Martin said Irish Water was like a "secret service" until recent days because there has been such a lack of information.

He said that nobody would deliver electricity on a county-by-county basis and water needs to be delivered on a national basis.

A debate on Fianna Fáil's call for greater transparency at Irish Water resumed in the Dáil this afternoon.

Independent TD Maureen O'Sullivan said we regard water as a right for those in the developing world, but expect Irish people to pay for it.

Ms O'Sullivan claimed people were being asked to pay for an antiquated leaking system that provided poor water.

Independent TD Finian McGrath also said he rejected the notion of being charged for a service that citizens were already paying for in higher taxes.

Waterford Independent TD John Halligan said the charges would impose a greater burden on the poor than on the rich.

Responding to the debate Environment Minister Phil Hogan said if we were to attract industry to provide jobs we needed to spend money on our water infrastructure.

Mr Hogan accused Fianna Fáil of seeking to smear the good name of people associated with Bord Gáis insisting his Government had nothing to hide.

Fianna Fáil's Charlie McConalogue said people who had taken the initiative to supply water to remote areas in group water schemes were still in the dark about how they would be involved in billing.

The Donegal TD claimed there had been no effort by Government to provide answers.

The Government won the final division on the motion by 71 votes to 51 .

Following the debate Fianna Fáil claimed Minister Hogan may have misled the Oireachtas in 2012 when he told a committee that the provision for Irish Water was just €10m.

Spokesperson Barry Cowen said the minister either deliberately lied about how much taxpayers' money was being spent or he accidentally gave a gross underestimation to the Oireachtas committee three months after the Economic Management Council signed off on a €180m spend.

In a transcript of the meeting Mr Hogan told members his departmental estimates for the year included a provision of €10m to set up the structure for the establishment of Irish Water but that did not include the cost of metering which would be rolled out over a number of years.

The minister has refuted the claims and clarified that he was not speaking on the overall establishment costs in respect of Irish Water.

He explained the expenditure was for interim measures including €5m for surveying of meters and €2.75m for administrative costs. 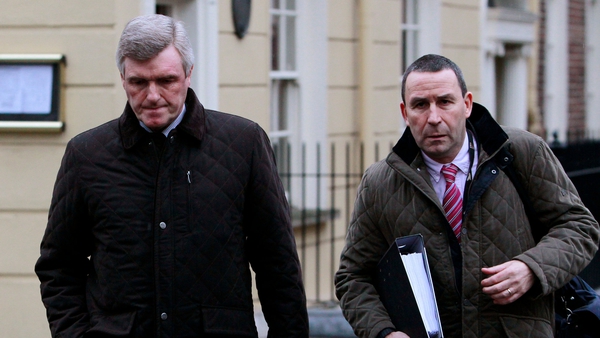