Staff in Irish Water are in line for bonus payments averaging €7,000.

Executives at the utility defended their performance pay at a meeting of the Oireachtas Public Accounts Committee insisting they had adopted the model used by their parent company Bord Gáis.

He confirmed that so far, no bonuses have been paid but every employee has the opportunity to receive a bonus based on their performance.

Mr Tierney said the performance of staff to date had been “absolutely outstanding” and English utility companies with whom they had contact had expressed amazement at what was being asked of staff.

He said he was satisfied the bonus system is in line with the pay of its parent company Bord Gáis.

Earlier, opposition TDs widely criticised the bonus system and comments from Environment Minister Phil Hogan that he does not "micromanage" the semi-state company.

PAC Chairman John McGuinness said it would be scandalous if the minister did not "micromanage" the utility.

Independent TD Mattie McGrath questioned how bonuses could be justified when the public sector is enduring pay freezes.

Minister for Social Protection Joan Burton said the country could not go back to a bonus culture.

She said she was astonished to hear news of Irish Water staff getting bonuses, saying she believed there was no room for bonuses in the current climate.

A Government spokesman said that it was not Government policy to pay bonuses in semi-state companies.

Minister of State at the Department of Finance Brian Hayes was also critical of the bonus payments, but he defended Minister Hogan, saying "he had acted totally correctly in this entire saga".

Mr Hayes added that Irish Water had not handled this well and information should have been out in the open before now.

Junior Environment Minister Fergus O’Dowd told the Dáil that claims that Mr Hogan deliberately withheld information about the set-up costs was simply not the case.

Earlier the Taoiseach told the Dáil he was aware the start-up cost of Irish Water would be €180m.

Mr Kenny was responding to Fianna Fáil leader Micheál Martin who said Irish Water had been established under a cloud of secrecy.

Enda Kenny said he took full responsibility for the policy decision of moving to a single utility which would save over €1bn.

He said the department had been getting detailed breakdowns on the information while deputies were refused requests for information.

Secretary General of the Department of the Environment, Geraldine Tallon told the PAC she did not speak to Minister Hogan "in specific terms” about consultancy costs.

She said the minister was aware of the €150m budget and €30m contingency.

She said this will all be carried out in a very short period of time and it was recognised that external service providers would be required as part of this process.

Minister for the Environment Phil Hogan defended the management of Irish Water, saying he believed the utility would give good value for money.

Speaking to reporters this morning, Mr Hogan said the issue of bonuses was one for Irish Water and the Department of Public Expenditure who decide public pay policy.

He also reiterated that he would not "micromanage" a semi-state, no more, he said, that any other minister, adding you have to allow professionals get on with their jobs.

Mr Hogan said €2bn would be saved following the setting up of Irish Water.

Asked if it was a PR disaster for the company, he replied you cannot make an omelette without breaking eggs and that the costs would compare favourably internationally.

He also said you cannot set up a new utility on fresh air.

Mr McGuinness of the PAC said the veil of secrecy surrounding Irish Water is unacceptable and the Comptroller and Auditor General should audit its books.

Speaking on RTÉ's Today with Sean O'Rourke, Mr McGuinness said: "The Comptroller and Auditor General does not audit the books of Irish Water and I believe that he should." 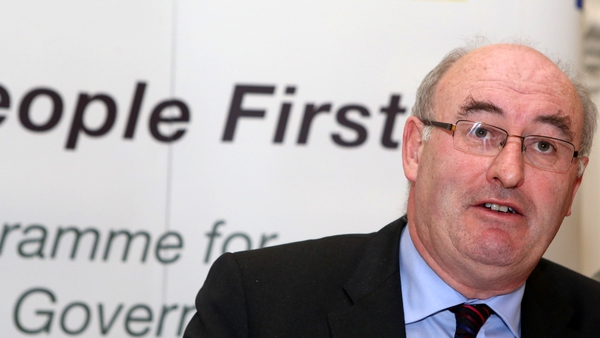