Fianna Fáil has published a bill which it says would introduce immediate reforms to the Seanad.

Under the bill, the vote would be extended to those living in Northern Ireland who qualify for Irish citizenship and those holding a current or valid Irish passport living outside the State.

Under the party's proposals, voters would be eligible to cast a vote for the vocational panels which are made up of 43 members.

This would mean voters could cast a vote in the selection of one of the five vocational panels. Voters would decide to which panel they wanted to cast their ballot.

The Taoiseach would still nominate 11 members. Under the bill the Taoiseach will take into consideration the need to ensure the 11 would be representatives from eight different groups from Ireland and Northern Ireland.

The groups include the elderly, the young, the new Irish community, the Irish diaspora, people with disabilities, sporting organisations, the arts and the Traveller community.

Fianna Fáil's plans would also see the extension of the graduate franchise for the six university seats to all third level institutions.

The party also says that a person could be nominated to run in the Seanad election by one or more nominating bodies, by a local authority or by 500 people. 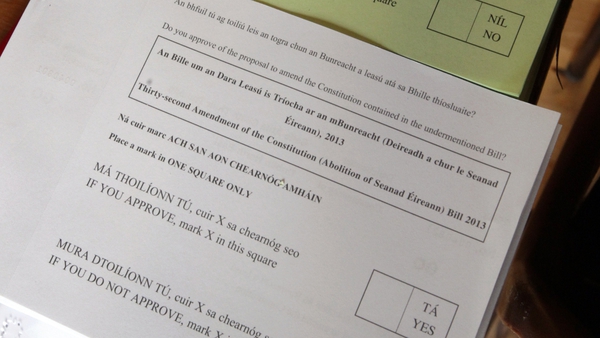