ESB Networks has confirmed around 800 customers will remain without power tonight despite efforts to restore services across the country.

By this evening the company said it will have returned electricity supplies to 78,000 homes and businesses.

However, a number of faults will remain overnight affecting 300 customers in Tralee, 200 homes and businesses in Ennis, 200 in Bandon/Dunmanway/Killarney and 100 customers in Newcastle West.

In a statement the company said it would endeavour to make contact with all of the customers expected to be without power tonight.

Vulnerable individuals will be contacted by phone while remaining customers will be sent text messages.

"Every effort has been made to get power back as quickly as possible, (however) the extent of the damage caused by the worst storm in years meant that the full restoration took this time," the company said.

ESB Networks said it had diverted resources to the worst-affected areas in the south and southwest which are Bandon, Killarney, Galway, Ennis, Newcastle West and Tralee .

"In situations where storms have caused extensive damage to the electricity networks across the country, fixing the smaller more localised faults can be frustratingly slow for both customers and network technicians," the company said in a statement.

"Today will be a difficult and long day, with an average of eight customers per fault, progress will be frustratingly slow for the effort expended.

"Many of the faults have been caused by falling trees and branches and these need to be cut and removed before the fault can be repaired and supply restored."

Eircom technical teams are working to fix faults on its network which have left 8,700 customers without landline or broadband services.

Repair work yesterday was hampered by the poor weather conditions.

The number of customers without services rose by 500 since yesterday but Eircom said this was expected as more people reported faults.

Around 350 workers are now working to fix the faults with 700 on duty yesterday. 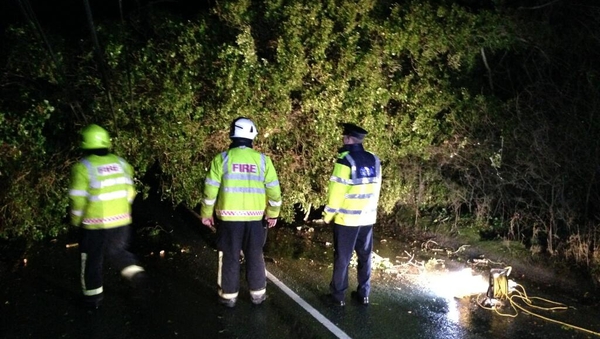 Thousands to remain without power overnight