ESB Networks has said around 700 homes in the west of the country are still without power due to a lightning storm this afternoon.

The areas worst affected are north Mayo and the north west in general. Crews have now restored power to most of west Galway.

Repair crews are working to restore power to those affected as well as to homes on the Aran island of Inis Mór after power outages were reported there over the past 24 hours.

Some 7,000 customers in Skibbereen, Co Cork, lost power earlier today due to a fault. Electricity has now been fully restored to the area.

As many as 17,500 homes were without power throughout the country today.

Customers experiencing a loss of supply are advised to check PowerCheck online or download the PowerCheck app to their mobile phone to check if the fault has already been logged.

ESB Networks is asking customers to report any fallen wires or emergency situations to 1850 372 999.

Eircom has said that almost 7,000 of its customers are without service in the west, southwest, and east of the country due to lightning strikes.

It says it expects to clear 800 faults today and although crews will not be working tomorrow, they will be working again on St Stephen's Day.

Met Éireann has said it expects winds to gradually moderate and conditions to improve.

Irish Ferries cancelled all fast ferry sailings today due to the stormy weather and passengers will now be accommodated on conventional craft.

The Irish Ferries service between Rosslare and Pembroke was also cancelled.

Aer Lingus said all passengers who were affected by three flights cancelled yesterday due to bad weather would be accommodated today.

One flight from Heathrow to Shannon was cancelled due to high winds. The airline said a bigger plane would be flying out of Heathrow Airport today.

A second flight, which departed Cork for Heathrow yesterday evening, had to return to Cork Airport because it could not land at Heathrow due to high winds. Aer Lingus said there would be an additional flight from Cork to Heathrow today.

The airline says passengers who were due to return on the Cork-bound flight from Heathrow yesterday would also be accommodated on the return additional flight.

It said it has seats for all passengers affected.

All flights to and from Shannon Airport operated. However, the airport asked passengers to check their airline's website for more details.

Eleven flights bound for Dublin from Britain, continental Europe, and Abu Dhabi were diverted to Shannon Airport this afternoon due to the stormy weather conditions.

Six of those flights, operated by Aer Lingus, Aer Lingus Regional, and Etihad, have since flown back to Dublin.

Passengers on five Ryanair flights also diverted to Shannon were transported back to Dublin by bus.

People collecting family and friends from Dublin Airport are advised to check their airlines' websites for more details.

Buses and trains are running to schedule. Intending passengers are advised to consult operators' websites.

Meanwhile, the Coast Guard is advising the public to stay away from the shoreline on Atlantic coasts where there is heavy swell and to avoid engaging in water sports.

The Coast Guard has asked people not to venture out unnecessarily when gale force conditions are forecast, avoid exposed coasts, cliff paths and coastal areas during inclement weather over the festive period and owners of small vessels and fishing vessels in coastal waters should seek shelter and secure them properly with moorings. 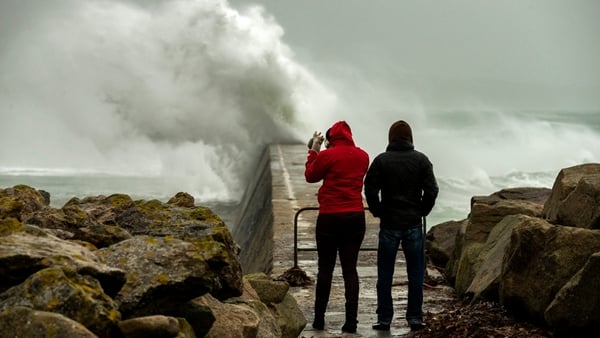