European Union leaders said the door to a closer partnership with Ukraine remained open, but not necessarily for the current Ukrainian leadership.

At a summit in Brussels, EU leaders held a post mortem on Ukrainian President Viktor Yanukovych's last-minute U-turn on a trade pact with the EU.

"Europe is open for Ukrainian people but not necessarily for this government. That's the message," said Lithuanian President Dalia Grybauskaite.

Her comments to reporters reflected ambiguity in the 28-nation bloc about whether to offer Ukraine the ultimate prospect of EU accession or only an economic partnership that would stop short of membership rights.

"Europe is open to the Ukrainian people, and any time the Ukrainian state is ready, with all conditionalities, to join the European Union in the future, or to sign an association treaty, we will be open for it," she said.

While former communist countries that have joined the EU see Ukraine as a candidate for membership in the long run, many west European states, including France and Germany, have suffered growing enlargement fatigue as the bloc has expanded eastwards.

To them, any membership commitment to Ukraine goes too far.

Ukrainian officials and diplomats in Kiev said fierce Russian economic pressure and the unwillingness of the EU and the International Monetary Fund to offer more aid and be more flexible prompted Mr Yanukovych to change his mind.

Brussels has also sent mixed signals about the amount of aid Ukraine stood to receive - between €600 million and up to €19 billion over seven years.

The Ukrainian leader reached a deal with Russian President Vladimir Putin this week on a $15bn (€10.9bn) bailout and a big cut in the cost of Russian gas supplies to Kiev.

Mr Yanukovych made no commitment to join a Russian-dominated customs union.

The Ukrainian leader, whose Party of Regions is strongest in the eastern Russian-speaking part of the country, also had to juggle his own political survival and the economic interests of his family and oligarch supporters.

Other EU leaders made clear they want to continue working towards a free trade agreement under which Kiev would adopt many of Brussels' single market rules, but they rejected calls from Mr Yanukovych's government to offer more financial help.

"This is not a question of money," Finnish Prime Minister Jyrki Katainen said. "Signing an association agreement is a value choice and we cannot buy any countries for the European Union."

Hundreds of thousands of Ukrainians have demonstrated in sub-zero temperatures against the snub to the EU, calling for closer ties with the bloc, which they associate with democracy, human rights and cleaner government. 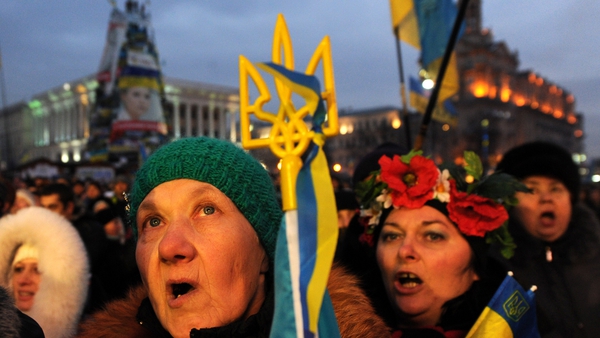