The European Union said it remained ready to sign a trade agreement with Ukraine, despite a snub by President Viktor Yanukovych.

The EU has tried to reassure Russia over the proposed deal, saying that closer EU-Ukraine relations posed no threat to Russia.

The EU also sought to paper over apparent divisions in its approach to Ukraine, as the Dutch foreign minister slapped down a senior EU official for announcing on Twitter that he had suspended work on the trade pact.

Mr Yanukovych stunned the EU last month by abandoning at the last moment plans to sign a far-reaching trade and cooperation pact with the 28-nation union in favour of closer ties with Russia.

His decision to spurn the association agreement triggered mass protests in Ukraine, which is close to bankruptcy.

It also prompted angry exchanges, with the EU and Russia accusing each other of pressuring Ukraine.

EU foreign ministers meeting in Brussels said the door remained open to closer EU-Ukraine ties and they tried to clear the air with Russia at lunchtime talks with Russian Foreign Minister Sergei Lavrov.

"Ministers confirmed again today the EU's readiness to sign the association agreement ... as soon as Ukraine is ready and the relevant conditions are met," EU foreign policy chief Catherine Ashton told a news conference after the talks.

"We believe the agreement provides the best way to address Ukraine's short-term economic challenges. Its signature too would send a powerful signal of confidence to international markets and to financial institutions."

Ministers had told Mr Lavrov it "would not have a detrimental effect on relationships with Russia in any way" if Ukraine signed the agreement with the EU, she said.

Mr Lavrov told reporters he had agreed with the EU ministers that "everyone should respect the sovereignty of any country, including Ukraine, and everyone should allow the peoples to make their free choice of how they want to develop their country". 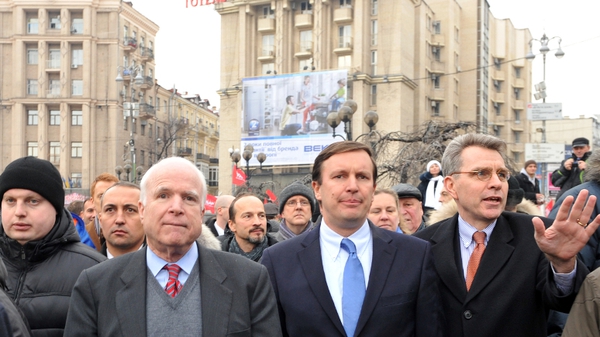