The Smithwick Tribunal has concluded that there was Garda collusion in the killing of two RUC superintendents in south Armagh in March 1989.

Minister for Justice Alan Shatter has apologised without reservation for any failings identified in the report on the part of the State or any of its agencies.

He said the murders were stark examples of the brutality "which pervaded this island for many dark years".

Tánaiste Eamon Gilmore said he was appalled and saddened by the finding of collusion and described it as a matter of grave public concern.

Mr Gilmore, on behalf of the Government and people of Ireland, apologised without reservation to the Breen and Buchanan families.

In his 500-page report, Mr Justice Peter Smithwick states that he is satisfied that there was someone within Dundalk Garda Station assisting the IRA.

But the report concluded that the Tribunal has not uncovered direct evidence of collusion.

"There is no record of a phone call, no traceable payment, no smoking gun," the report has found.

Judge Smithwick said it seems to him to be likely that the Provisional IRA would seek to exploit that resource by having one or more individuals confirm the arrival of the two RUC officers at the station.

He said: "It is particularly regrettable that both police services acted swiftly to dismiss speculation of the possibility of collusion rather than to deal with that by means of a thorough and credible investigation."

"This was an example of the prioritisation of political expediency in the short term, without due regard to the rights of victims and the importance of placing justice at the centre of any policing system."

He said, however, that detailed consideration must be given to the events of 20 March 1989, when the RUC officers were killed.

He said following detailed consideration, he has reached the conclusion that from the afternoon or early evening of the previous Thursday 16 March 1989, it was intended that Chief Supt Breen and Supt Buchanan would travel to Dundalk at the beginning of the following week.

Those RUC officers who attended that meeting would have been aware of this plan, and a number of others became aware of it during the course of Friday 17 March and Saturday 19 March.

He went on to note that just after 10am on Monday 20 March Supt Buchanan told Supt Tierney in Dundalk Garda Station that he and his Divisional Commander wished to visit the station that day.

Chief Supt Nolan shared that information with Inspector Frank Murray at a tea break at around 11am and the possibility that other persons heard that conversation cannot be excluded.

Judge Smithwick found that Active Service Units of the IRA were active on the day in question and were on standby for an anticipated operation, before the arrival of the two officers at Dundalk Garda Station.

He said that it seemed "beyond doubt" that the IRA acquired information that the two officers had arrived at the station.

He also said the evidence pointed to the conclusion that Supt Breen was the target of the operation and that the Provisional IRA knew he was coming.

He said he was satisfied that the evidence pointed to the fact that there was someone within the garda station assisting the IRA.

In his findings, Judge Smithwick said the "integrity of and confidence in An Garda Síochána can properly be maintained only if suggestions of inappropriate or illegal conduct by members are taken seriously, transparently and thoroughly investigated and, above all, not tolerated or ignored on the basis of some misguided sense of loyalty to the force or to its members".

He said the culture of failing to adequately address suggestions of wrongdoing, either for reasons of political expediency or by virtue of misguided loyalty, has been a feature of life in this State.

He concluded that "too often that culture has resulted, some years later, after doubts, grievances and injustices have festered, in the setting up of investigations, commissions or Tribunals of
Inquiry".

Judge Smithwick said the Tribunal sought to establish the truth and, in so doing, he said he hoped that it contributed one small part to changing that culture.

The Smithwick Tribunal was set up in 2005 to examine whether a member of An Garda Síochána or any other employee of the State had passed information to the IRA which allowed them time to set up the ambush in south Armagh in which the RUC officers were murdered.

Mr Justice Smithwick began private investigations in 2006 and held public hearings from 2011 until earlier this year.

Corrigan had inappropriate dealings with IRA

The tribunal found that former garda detective Owen Corrigan had an inappropriate relationship with subversives.

Judge Smithwick said Mr Corrigan became disaffected, possibly in the 1980s, with the detective branch in Dundalk where he was based.

"I also find that what may have started out as a professional relationship with subversives for the legitimate purpose of intelligence-gathering ultimately developed into a relationship of an inappropriate nature," he said.

Mr Corrigan's evidence to the tribunal was vague, evasive and inconsistent and was not credible, the report concluded.

"I do not think that he has been truthful to the tribunal in his evidence in relation to a number of matters," Judge Smithwick said.

Furthermore, it was found that widespread concerns about Mr Corrigan's "extra-curricular activities" - including smuggling and his relationship with subversives - were ignored by senior gardaí.

"I believe that there were sufficient warning signs, such that senior Garda officers should have taken steps to have Detective Sergeant Corrigan transferred away from the border area earlier than this, in fact, occurred," Judge Smithwick said.

RUC concerns about him were relayed to assistant commissioner Eugene Crowley - who went on to become garda commissioner - in 1987 "but there is no evidence of any action having been taken on foot of this information," the tribunal found.

Judge Smithwick found that while there is some evidence that Mr Corrigan passed information to the Provisional IRA, he is "not satisfied that that evidence is of sufficient substance and weight to establish that Mr Corrigan did in fact collude in the murders.

No evidence Colton colluded with IRA in murders

Judge Smithwick said that in relation to retired sergeant Leo Colton he found that on a strong balance of probabilities he was someone who in the course of 1995 and 1996 assisted the Provisional IRA by having his former colleague sergeant Finbarr Hickey sign false passport application forms.

However, he said that while this was a relatively significant form of assistance and IRA members had "considerable trust" in Mr Colton and he would have been in the position to provide information about the IRA operation, the evidence does not establish that he colluded with the Provisional IRA in the murders.

Hickey not in a position to pass information on the day

In relation to former sergeant Hickey, Judge Smithwick concluded that he was not on duty on the day of the ambush, and was "in all probability" not in the station before the murders occurred.

The judge said he was satisfied that Mr Hickey was not in a position to pass information to the IRA which facilitated the ambush.

Supt Bob Buchanan's son William said: "The findings are both incredible and shocking and confirm the existence of a mole in Dundalk station. This led to my father's death."

The family of Harry Breen have said all their fears have been realised by the tribunal's devastating findings.

Lawyers for the family said the officer and his trusted colleague Superintendent Bob Buchanan were betrayed by their counterparts in the Republic's police force. 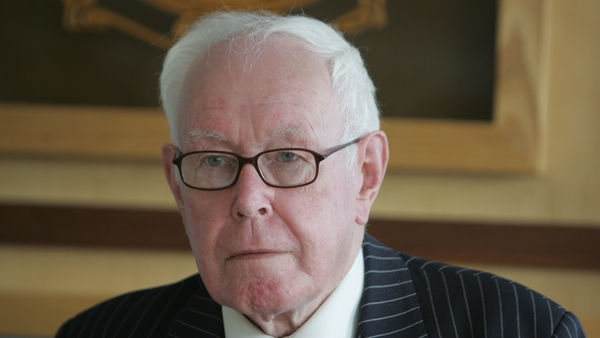