A former chairman of the Central Remedial Clinic has said there has been no misuse of funds at the charity.

Des Peelo said the Health Service Executive approached the organisation in 2009 and said that under new austerity measures, some CRC employees were being paid above the threshold.

He said he met nine representatives from the HSE and agreed that the salary levels would continue because the CRC had contractual obligations to its employees.

Speaking on RTÉ's Today with Sean O'Rourke, Mr Peelo said there was no secret or hidden agenda and the agreement was made with the HSE in writing.

He said that money from fundraising efforts, such as the Santa Bear Appeal, was not used.

In relation to the CRC's current CEO, who does not receive any top-up payment, Mr Peelo said his contract was a new one and probably did not contain the contractual obligations that previous contracts had.

Mr Peelo also rejected calls for the board of the CRC to resign.

"No one has done anything wrong," he said.

"This is a marvelous organisation and I must admit, speaking on a personal level, I'm outraged at the comments by Shane Ross and suggestions that he has made about improprieties."

The HSE has denied that any breaches of the pay cap were sanctioned by the HSE.

In a statement, it said: "The arrangement entered into by CRC with its former CEO and other senior staff at the organisation was not at any stage agreed to or sanctioned by the HSE.

"All HSE-funded agencies are expected to comply with public pay policy.

"It came to the attention of the HSE in 2009 that the CEO and a number of other staff of the CRC were being paid substantially above comparable levels within the HSE or other public bodies.

"The HSE was concerned about these arrangements and as such held a meeting with the Chairman of CRC to address this issue.

"The HSE set out the appropriate salary for these posts in line with public pay scales and informed the CRC that these were the salary levels the organisation was required to comply with.

"For legal contractual reasons the agency stated that it could not change the contractual conditions of these staff at the time.

"The CRC gave a commitment that on the refilling of these posts in the future, rates would be brought in line with public sector pay rates.

"The HSE contacted the agency again at this time and the agency has since confirmed to the HSE that the new CEO is now paid at the Local Health Manager scale, which starts at €86,000, and is the appropriate scale for this role in line with public sector pay rates. "

Meanwhile, SIPTU has called on the Government to address the issue of salary top-ups for senior managers in voluntary bodies funded by the HSE.

Mr Bell said his members who include porters, caterers, health care assistants and other lower paid grades had suffered cuts under the Haddington Road Agreement and had still continued to maintain services.

He said they were now asking how the Government was going to ensure fairness in the contributions made by all employees.

Mr Bell warned that if the Government was not seen to address the pay issue on an equitable basis there would be challenges going forward in trying to address reforms.

He said members were also concerned at Government threats to impose a cut the block grant to voluntary bodies equivalent to the non-compliant elements of salaries.

No top-up payments 'in majority of charities'

The head of a group that represents professional fundraisers has said there are no top-up payments in 95% of charities.

But the rest relied totally on fundraising, so top-up payments were not an issue.

Speaking on RTÉ's Morning Ireland, Ms Hanniffy said there were over 8,000 charities and the average chief executive salary in the sector was €65,000.

She said it was difficult to say if the recent controversy surrounding the topping up of executives' pay with money raised from fundraising will impact the charity sector this Christmas.

Ms Hanniffy called for charities to be more transparent in the way they spend donations.

Last week, the Central Remedial Clinic confirmed that some of the money donated by the public is being used to top up the salaries of some of its staff.

It admitted that the additional salary amounts were over the Department of Health's consolidated pay scales.

Yesterday, Taoiseach Enda Kenny said the controversy over the CRC top-up payments was not acceptable in any circumstances.

He said people must expect that the money they raise is going towards the services and facilities used by children who attend the CRC.

Ms Hanniffy said only a minority of larger charities had big incomes.

"These jobs these people are doing, some that are working in the overseas, some that are heading up sick children charities, are absolutely essential," she said.

"We need the best people that have really good accountancy skills and IT skills. That is so important and it is all part of delivering essential services.

"And we really need to reassure the donors out there that ... their money is going to where it is supposed to be going."

Ms Hanniffy said some of these CEOs were looking after people's lives in horrendous places and said they were not really getting huge rewards for that work.

If they went into other sectors, she said, they could be earning much more money.

Finlay hopes fundraising will not be affected

Barnados Chief Executive Fergus Finlay has said he hopes the public will continue to help with Christmas fundraising efforts following the controversy surrounding top-up payments at the CRC.

Speaking on the same programme, he said: "We can't do what we have to do, what we need to do, without the trust and concern of the public.

"All the evidence that we have would suggest that there is an extraordinary level of decency and compassion in Ireland, particularly at this time of year.

"But at the same time people really want to trust that it is being properly used and it's our job as charities to provide that reassurance."

Mr Finlay said it was important to remember that the current CEO of the CRC is not the beneficiary of any top up.

He said that CRC was a brilliant organisation that does brilliant work.

Mr Finlay said the Minister for Justice intended to introduce legislation to require charities to be regulated next year, which he would welcome.

He said he believed that all charities should be able to provide fully audited accounts at all times.

He said: "I operate on the basis that if you can't find, easily, on a charity's website an independently audited set of accounts you can take it pretty well for granted that they're not applying best practice in terms of their reporting and it's a fairly easy check to do." 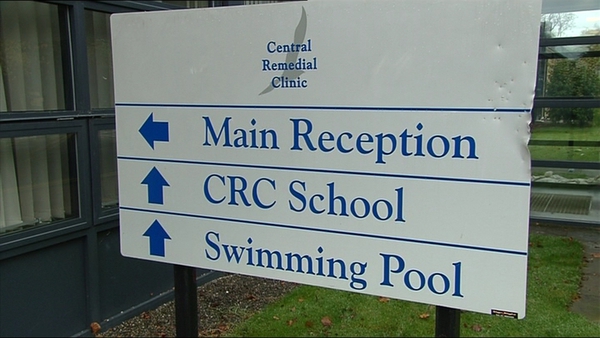