Amnesty International has accused companies in Qatar of serious exploitation of migrant workers on construction projects for the 2022 World Cup.

In a new report, Amnesty said Qatar's construction industry is rife with abuse of migrant workers who are "treated like cattle" and live in squalid accommodation exposed to overflowing sewage.

Amnesty has called on world soccer's governing body FIFA to work with the Qatari authorities to stamp out abuses of workers who mainly come from South Asia.

"Our findings indicate an alarming level of exploitation in the construction sector in Qatar," Amnesty secretary general Salil Shetty said.

"FIFA has a duty to send a strong public message that it will not tolerate human rights abuses on construction projects related to the World Cup."

"It is simply inexcusable in one of the richest countries in the world, that so many migrant workers are being ruthlessly exploited, deprived of their pay and left struggling to survive."

"Construction companies and the Qatari authorities alike are failing migrant workers. Employers in Qatar have displayed an appalling disregard for the basic human rights of migrant workers.

"Many are taking advantage of a permissive environment and lax enforcement of labour protections to exploit construction workers."

Amnesty is the latest organisation to focus on treatment of migrant workers in Qatar, following similarly scathing reports by the International Trade Union Confederation.

The group said it had carried out interviews with around 210 migrant workers in the construction industry during two visits to the country in October 2012 and March 2013.

It also held meetings with 22 companies involved in construction projects and met government representatives on more than a dozen occasions.

Amnesty also said its researchers met dozens of construction workers who were prevented from leaving the country for many months by their employers.

James Lynch, who deals with Migrants' Rights issues for Amnesty International in the Gulf, said the abuse was widespread and extreme.

Speaking on RTÉ's News at One, he said: "We've found several large groups of workers who've been unpaid for months, unable to leave the country and even people suffering from food deprivation, without electricity and one large group of people we met who didn't even have running water for a month." 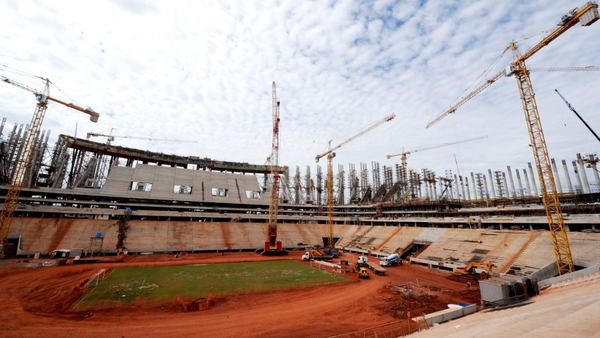 Brazil has yet to begin 40% of World Cup projects