In a statement following a meeting in Brussels, the ministers congratulated Irish authorities for the successful implementation of the bailout programme.

It was also confirmed that Ireland will be under surveillance by the EU and ECB on a twice-yearly basis after it leaves the bailout.

The Government decision was finalised at a Cabinet meeting this morning.

Last week, the Troika concluded its 12th and final visit ahead of Ireland's exit from the bailout programme on 15 December.

Speaking in the Dáil, Taoiseach Enda Kenny said it was "the right decision for Ireland".

"We will exit the bailout in a strong position," he told TDs.

The Taoiseach said Ireland was now in a position to fund itself on the markets and that the National Treasury Management Agency had built up a cash reserve of more than €20bn.

"We still have a long way to travel but clearly we are moving in the right direction," he added.

"I have spoken on a number of occasions with Chancellor Merkel. She confirmed that this (post-bailout credit line) was a decision for Ireland to make."

Mr Kenny said the move will not mean any windfall of cash for the country or that Ireland's economic challenges are over.

He described the announcement as a "significant step" towards economic recovery.

"Never again will our country's fortunes be sacrificed through greed and short-term gain," he said.

Minister for Finance Michael Noonan said the decision was in Ireland's best interests, and that he hoped to publish the main outlines of a medium-term economic strategy before Christmas.

He said he had taken advice from many colleagues, including the German government, but had never asked for support.

Speaking on RTÉ's Six One News, Mr Noonan said the crunch issue was timing and that a pre-arranged programme would defer the decision made today for another 12 months.

The minister said there are a number of factors that make exiting the bailout programme at this time favourable, including the reduction of interest rates by the ECB.

He said that the Irish economy is growing along with the economies of the United States, the EU and the UK.

These favourable circumstances, which allow the Government to minimise its risk, may not exist next year, he added.

The Department of Finance said confidence and sentiment towards Ireland has improved considerably in recent months and domestic and international economic conditions were also improving.

European Commission Vice-President Olli Rehn described the announcement as a "good day for Ireland and the Irish people" and a good day for Europe.

He told RTÉ News that the commission had always said it would support whatever decision the Government took on whether or not to avail of a backstop.

Mr Rehn said he believed today's decision would "pave the way" for a successful exit by Ireland from its bailout programme.

He added that Europe would offer support to Ireland in the event of any economic shock that may occur after the country re-enters the financial markets next year.

European Central Bank President Mario Draghi said that the Government should be congratulated on the country's imminent exit from its bailout programme.

Speaking in Brussels, he said that Ireland's programme had been on target "for years" and that the progress had been "significant".

The ECB president did not comment on the Government's decision to exit the bailout without an effective backstop, but Mr Draghi did say he believed "all actions" that have yet to be implemented by the Government "will be done".

The decision has also been welcomed by the German government.

It said today was an important day for Ireland and the eurozone and that it was now time for this country to return to the markets without the need for further credit support.

Tánaiste Eamon Gilmore told the Dáil it was an "historic, important and welcome" announcement.

However, the Labour leader added: "There will be no celebration until our economic fortunes are fully recovered." 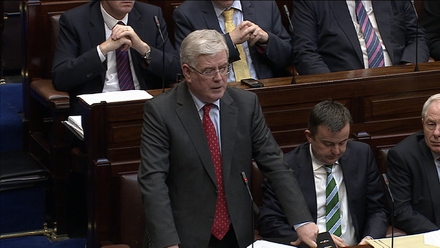 Mr Gilmore said the renegotiation of bailout interest rates and the Anglo promissory note were among the reasons Ireland can cleanly exit the bailout.

Fianna Fáil accused the Government of putting political strategy before the interest of Ireland.

Party leader Micheál Martin said a case should be presented by the Government on why Ireland does not need a precautionary credit line.

Fianna Fáil Finance Spokesperson Michael McGrath said it would have been prudent to negotiate a precautionary credit line in the event of anything going wrong.

Speaking to RTÉ's News at One, Mr McGrath said the French economy was contracting, Germany's economy was slowing down and the ECB has further cut interest rates.

"We are now entering quite an uncertain phase. Yes we have a substantial buffer of cash but you don't want to run down to such an extent that you have only a few months left," he said.

Sinn Féin President Gerry Adams welcomed the move, but said the Government should not applaud itself for decimating public services and leaving families across the State in poverty.

Independent TD Stephen Donnelly described it as a "bittersweet moment" for Ireland and stressed the need for retrospective capitalisation.

Shane Ross TD said the bond markets would require as much austerity as the Government has been imposing at the whim of the Troika. 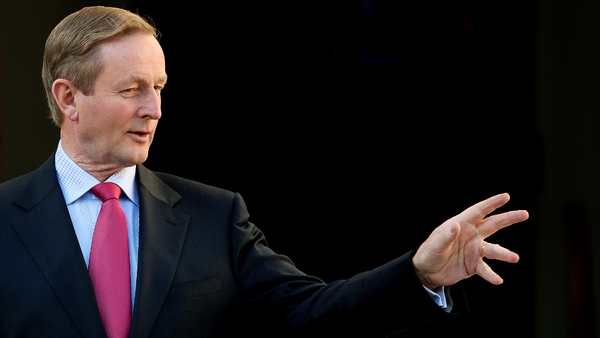