Taoiseach Enda Kenny has said that today was an historic day, as the Troika concluded its final visit ahead of Ireland's exit from the bailout programme next month.

In its last review, the International Monetary Fund said the Irish recovery remained on track.

"Today is historic in the sense that we have come from a very difficult period," Mr Kenny said.

"People now see the decisions have been made as part of a process leading to the programme being completed and over.

"And afterwards with a strong and clear Government leading to the better placement and management of our affairs," he said.

Minister for Finance Michael Noonan said responsibility for continuing to restore Ireland's economic fortunes is being passed back to the Government.

Minister for Public Expenditure and Reform Brendan Howlin said it was an "historic day many predicted we wouldn't reach".

The International Monetary Fund's mission chief for Ireland, Craig Beaumont, said Ireland's transition through the bailout would be held up as an example to other debt-hit nations.

On a conference call earlier, the IMF said Ireland had achieved a lot under the programme, but economic growth was disappointing.

It added that while banking had improved, much more needs to be done on problem mortgages.

The question still remains whether the Government will apply for a precautionary line of credit from the Troika.

Speaking at a press conference earlier, Mr Noonan said a decision on a possible backstop will be made before exiting the bailout.

He said the Government had a choice between a precautionary line of credit or a clean exit.

"It was not a personal choice", he said, adding that the decision will be made based on economic evidence.

Mr Noonan said the bailout programme was "difficult and hard on the Irish people".

The IMF said it was "open for business" if the Government wanted to discuss options for a backstop of credit.

The credit line would be emergency funding of €10 billion, which could be used in the event that Ireland cannot raise money from the bond market.

Elements within the EU, ECB and IMF believe it would be less risky if Ireland had access to the funding as it emerged from the bailout.

But discussions on Ireland's potential application for a precautionary line of credit are being complicated by the delay in the formation of a new German government.

The Department of Finance maintains that no decision will be made on whether it should apply for the funding until next month. Germany would have to sign off on any new arrangement because it would be a significant donor to the credit line.

But Chancellor Angela Merkel is not expected to form a new administration until Christmas.

Speaking on RTÉ’s Prime Time, Mr Bruton said progress on the Legal Services Bill, introduced in 2011, had been delayed because the priority was to bring in the Personal Insolvency legislation to deal with families in distress.

He said the Government was committed to deliver on this reform and he acknowledged that further reform in other areas was also required.

Minister Bruton said the sacrifices made by the public were seeing results.

He said Ireland had moved from a position three years ago where 7,000 jobs a month were been lost, the Government could not borrow, banks were insolvent and the country was in a “lousy deal” with the IMF, EU and ECB.

He said public finances were now strong, jobs were been created, the Troika deal was re-negotiated and the plan was shown to be working.

IMF says Budget figures are in line with profiles

Ireland's recovery remains on track and the Budget figures for this year are on profile and within targets, according to the IMF.

Speaking on the publication of the organisation's 12th and final review under the country's bailout programme, Mr Beaumont said that among Ireland's achievement's over the three years of the programme was regaining market access and making real progress on the budget.

But he said Ireland's growth is disappointing and "not what was anticipated".

Mr Beaumont said the country's economic growth figures did not meet original programme projections, but the external environment had been much worse than expected.

He said that while the banking sector was much improved, much work remains to be done on non-performing loans and mortgages.

The IMF also noted high unemployment and said more programmes, including training, need to be made available to the unemployed. 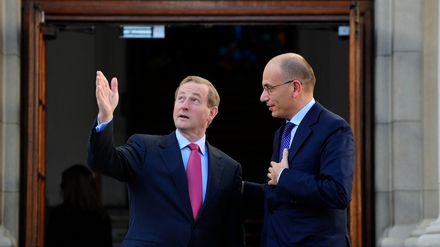 The Taoiseach said Italy is supportive of Ireland as it exits the bailout in the coming weeks.

Mr Kenny said this is a critical time for Ireland and Europe.

Mr Letta said it was a "new era" for Ireland and he wished the Government well.

Meanwhile, former deputy director of the IMF Donal Donovan has said there would be "no harm" in applying for a financial backstop following the exit from the bailout process.

Speaking on RTÉ's Morning Ireland, Mr Donovan said he did not believe the "final word" has been given in relation to the possibility of an additional credit line.

He said: "The Fiscal Advisory Council has supported the idea that the Government would seek such a backstop, mainly because of insurance.

"I personally also think it is no harm for there to be continued monitoring of the Irish economy."

Mr Donovan said the extension was a technical change, which gives flexibility to the Government ahead of any decision.

"We all know the role the German coalition negotiations could have on this," he said.

"I don't think the Government should take a decision until it has all the elements in its mind, including what might happen in the negotiations."

The National Economic and Social Council, which advises the Government on strategic issues for economic and social development, has said Ireland needs deeper reform and further institutional innovation.

It found that while there has been progress in many areas, some factors continue to limit Ireland's recovery.

The NESC said that the focus needs to turn to delivering a quality public service in the future, which must be done through substantive rather than budget-driven reform.

Director Dr Rory O'Donnell said Ireland had undergone a difficult adjustment under the bailout programme but must now continue to apply the discipline learnt during the last five years. 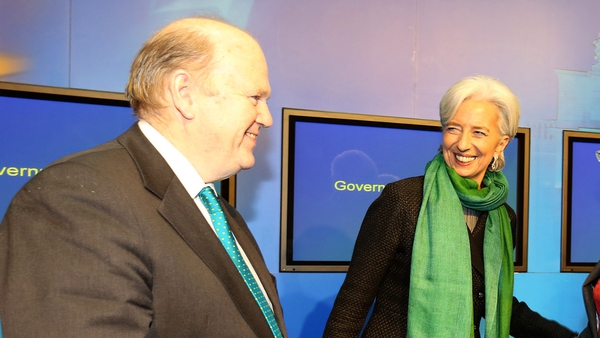