The head of the Pakistani Taliban was killed by a US drone strike in Pakistan today, several security sources have said.

The Taliban has confirmed the death.

Hakimullah Mehsud, who was believed to be in his mid-30s and was one of Pakistan's most wanted men, has been reported dead several times before.

The US had issued a $5m bounty on his head. He led an insurgency from a secret hideout in North Waziristan, the Taliban's mountainous stronghold on the Afghan border.

But late this afternoon, several intelligence, army and militant sources across Pakistan confirmed he had been killed in the drone strike in North Waziristan.

"We can confirm Hakimullah Mehsud was killed in the drone strike," said one senior security official.

Mr Mehsud's Pakistani Taliban is an umbrella of militant groups separate from but allied to the Afghan Taliban.

Mr Mehsud took over the Pakistani Taliban in August 2009 after a drone strike killed the previous leader, his mentor.

A senior Taliban commander said: "we confirm with great sorrow that our esteemed leader was martyred in a drone attack,"

His bodyguard and driver were also among the dead.

Danda Darpa Khel is a village about 5km from the regional capital of Miran Shah, killing at least four people.

North Waziristan is the stronghold of the Taliban insurgency and shares a border with Afghanistan.

The US offered $5m for Mehsud's capture after he appeared in a farewell video with the Jordanian suicide bomber who killed seven CIA employees at a base in Afghanistan in 2009.

US prosecutors have charged him with involvement in the attack.

The killing is the latest in a series of setbacks for the Pakistani Taliban.

A drone strike killed Mehsud's number two in May and one of his most trusted lieutenants was captured in Afghanistan last month.

The death follows months of debate over potential peace talks between the Taliban and the new government of Pakistani Prime Minister Nawaz Sharif, who swept to a landslide victory in May elections. 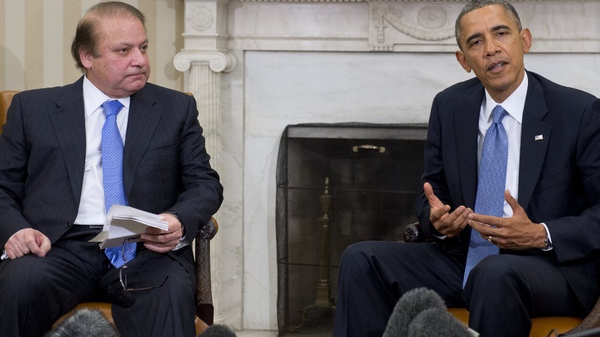