The US may have bugged Chancellor Angela Merkel's phone for more than 10 years, according to German news reports.

Germany's outrage over reports of bugging of Ms Merkel's phone by the US National Security Agency prompted it to summon the American ambassador this week for the first time in living memory - resulting in an unprecedented post-war diplomatic rift.

Der Spiegel said Ms Merkel's mobile telephone had been listed by the NSA's Special Collection Service since 2002 - marked as "GE Chancellor Merkel" - and was still on the list weeks before US President Barack Obama visited Berlin in June.

In an SCS document cited by the magazine, the agency said it had a "not legally registered spying branch" in the US embassy in Berlin, the exposure of which would lead to "grave damage for the relations of the United States to another government".

From there, NSA and CIA staff were tapping communication in Berlin's government district with high-tech surveillance.

Quoting a secret document from 2010, Der Spiegel said such branches existed in about 80 locations around the world, including Paris, Madrid, Rome, Prague, Geneva and Frankfurt.

The magazine said it was not clear whether the SCS had recorded conversations or just connection data.

Mr Obama apologised to Ms Merkel when she called him on Wednesday to seek clarification on the issue, Der Spiegel wrote, citing a source in Ms Merkel's office.

Frankfurter Allgemeine Sonntagszeitung also said Mr Obama had told Ms Merkel he had not known of the bugging.

Germany will send intelligence chiefs to Washington next week to seek answers on the allegations around Ms Merkel's phone.

Mr Obama ordered a review of US surveillance programmes after former NSA contractor Edward Snowden leaked documents that raised alarm in the United States and abroad.

Meanwhile, hundreds of protesters have marched on Capitol Hill in Washington to protest the US government's online surveillance programs, whose vast scope was revealed this year by former spy agency contractor Edward Snowden.

People carried signs reading: "Stop Mass Spying," "Thank you, Edward Snowden" and "Unplug Big Brother" as they gathered at the foot of the Capitol to demonstrate against the online surveillance by the National Security Agency.

The march attracted protesters from both ends of the political spectrum as liberal privacy advocates walked alongside members of the conservative Tea Party movement in opposition to what they say is unlawful government spying on Americans.

The event was organised by a coalition known as "Stop Watching Us" that consists of some 100 public advocacy groups and companies, including the American Civil Liberties Union, privacy group Electronic Frontier Foundation, Occupy Wall Street NYC and the Libertarian Party.

The groups have been urging Congress to reform the legal framework supporting the NSA's secretive online data gathering since Mr Snowden's disclosure of classified information about the programmes that are designed to gather intelligence about potential foreign threats. 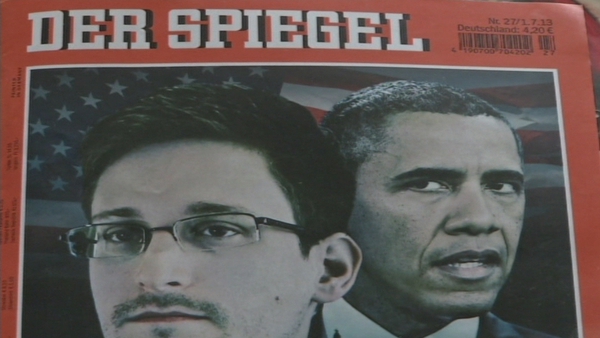