On the final day of his visit to El Salvador, President Michael D Higgins has visited the tomb of Archbishop Oscar Romero, murdered by then government forces in 1980.

His first engagement was at the country's Wall of Remembrance, on which up to 30,000 names of the dead and disappeared are inscribed.

He described it as a moving experience and a monument to the need not to forget.

Archbishop Romero was a prominent critic of the then government and its harsh military policy when he was shot saying mass in his cathedral in San Salvador.

His death sent shock waves around the world.

Dozens were killed at his funeral in a gun and bomb attack linked afterwards to government elements.

Eamon Casey, who was Bishop of Galway at the time, gave a dramatic account of the bloodshed on RTÉ.

Irish Aid has provided over €7m over the past nine years to projects managed by the Salvadorean government and President Higgins toured an exhibition featuring some of them.

He met one man now in his 30s whom he had first encountered as a small child in a refugee camp on an earlier visit. 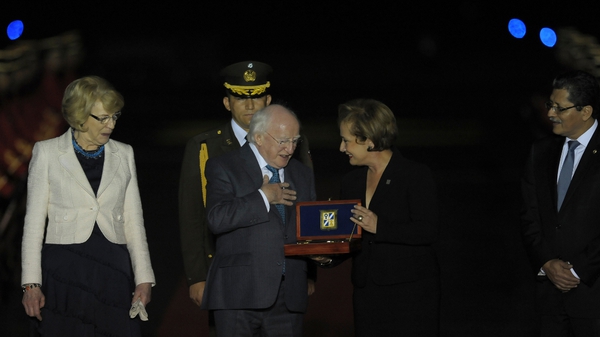