Taoiseach Enda Kenny has warned that commitments made by eurozone leaders to supporting Irish banks will be a factor in how successfully Ireland exits the EU-IMF bailout.

In a letter to EU leaders, Mr Kenny said the decision on how Ireland should exit its bailout is now "a finely balanced one".

He warned that eurozone leaders should stick to a commitment made in June 2012 to help Irish banks through the use of the EU's new permanent bailout fund.

In the letter, sent ahead of a two-day summit in Brussels, Mr Kenny made a direct link between the promise of help for Irish banks and the prospects for Ireland's exit from its bailout to be sustainable.

He said commitments made by eurozone leaders at the summit in June 2012 were "important for ensuring that Ireland's return to full market financing is sustainable and that Ireland can be a durable success story for the entire eurozone",

Last week, German Finance Minister Wolfgang Schaeuble appeared to rule out the kind of support that Mr Kenny is referring to.

In the letter, which was also sent to European Council President Herman Van Rompuy, Mr Kenny said the Government would "soon review the best options for our exit, in discussions also with the Troika".

Mr Kenny said the Government was aiming for a deficit of 4.8% for 2014, which was within Ireland's pledge under EU rules to get the deficit to 5.1%.

He said the Government would deliver a primary balance and a small surplus next year.

Minister for Finance Michael Noonan has been holding talks with EU Commissioner for Economic and Monetary Affairs Olli Rehn and the ECB on how Ireland should exit the EU-IMF bailout.

Mr Noonan will travel to Washington to hold further talks with the IMF at the end of this month.

The Government could decide to opt for a precautionary credit line from the European Stability Mechanism (ESM), which would have to be approved by eurozone finance ministers and which would come with monitoring and conditionality.

There are two versions of this approach, with the second, an Enhanced Conditions Credit Line (ECCL), seen as the more likely option.

Commenting ahead of the summit, Mr Kenny said it would be an opportunity for him to brief European leaders about the situation as it now stands in relation to Ireland's planned exit from its bailout programme.

The Taoiseach said it was critical for Ireland and other countries that decisions made in relation to banking union within Europe should be followed through to completion before moving on to other agendas.

He said he would be discussing this issue at the council meeting today.

The European Parliament has voted in favour of covering a €2.7bn shortfall in the EU budget for 2013, preventing a threatened shutdown of the European Commission by mid-November.

European Commission President José Manuel Barroso had appealed to MEPs in Strasbourg to pass the vote and ensure there was no "rupture" in payments.

However, referring to an ongoing but separate row over a €3.9bn shortfall to cover the outstanding bills for this year, Mr Schulz said it was a matter of deep regret that the commission and member states had not acted in an equally effective and swift manner with other financial problems.

This dispute has held up the passing of the EU's seven-year budget, known as the Multi-annual Financial Framework (MFF), worth nearly €1 trillion. 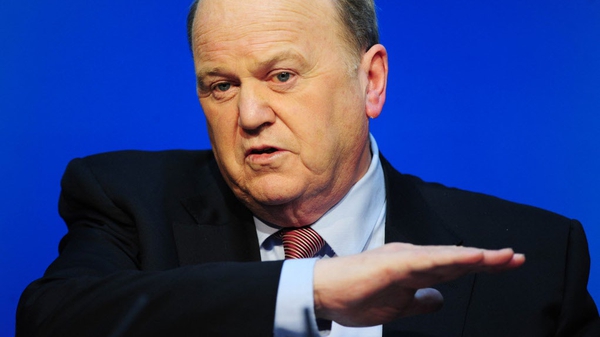