Thousands of pensioners have converged on Leinster House to demand the reversal of a range of Budget cuts affecting older people.

Organisers of the protest called on the Government to spare the Bereavement Grant and the Telephone Allowance, which face abolition in this week's Social Welfare Bill.

They also called for the reversal of prescription charge increases and the tightening of the means test for medical cards for over-70s.

Mairead Hayes, CEO of the Irish Senior Citizens' Parliament, which called the demonstration, said she was very pleased with the turnout.

Iaranród Éireann reported an increase of about one-third in the numbers of pensioners travelling and specially-hired buses brought protesters from areas like Cork City and the western seaboard.

Speaking in the Dáil, the Taoiseach said he would not resign over the healthcare debacle.

Enda Kenny was called upon by Sinn Féin leader Gerry Adams during Leaders' Questions to "go to the people and let them have their say".

Mr Kenny said people would have an opportunity to have their say in 2016.

Following criticism from the Sinn Féin leader over the Health Service, Mr Kenny said Mr Adams clearly had "great faith in Ireland", adding that Mr Adams "went to the States" to have his healthcare sorted.

He said he was glad to see Mr Adams in good health.

Mr Reilly has come under pressure following news that the departments of An Taoiseach and Public Expenditure & Reform will have oversight over plans to cut €666m from the health budget next year.

Speaking ahead of a Cabinet meeting, Mr Gilmore said he "absolutely" supports Mr Reilly and he was doing a very good job reforming the Department of Health, which was "a difficult job".

He said Mr Reilly also had the full support of the Government and would continue in his role.

Asked if there would be any change of mind on medical card cuts, Mr Gilmore said: "No, the Budget stands."

Mr Howlin said Mr Reilly has the full support of every member of the Cabinet.

He said he had confidence in Mr Reilly, saying he was doing a very difficult job well in a very challenging time.

The minister said the Budget had been determined by every member of the Cabinet and that the Government stood "united together".

Fianna Fáil has tabled a Private Members' Motion centred on the recent cuts experienced by the elderly.

The motion states that Irish society should protect the rights of older citizens and solidarity between the generations, and that services for older people should be protected to allow them to live independently and accepted with dignity.

The debate will conclude tomorrow when the Dáil will vote on it. 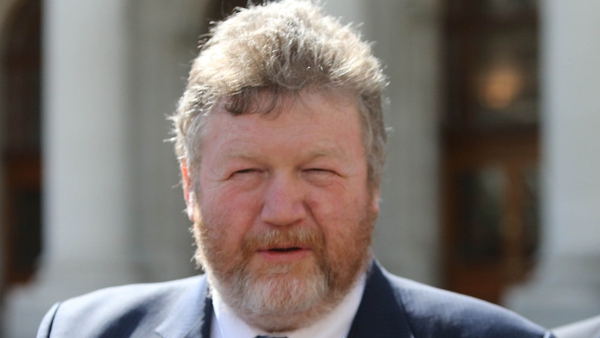