Australian officials fear that three large bushfires in the state of New South Wales could merge into one huge conflagration stretching across hundreds of kilometres and threaten Sydney.

A state of emergency has been declared giving the authorities the power to force people to leave their homes, cut electricity and water supplies, and shore up or demolish buildings.

At least 200 homes have already been lost in the fires and more than 2,000 firefighters from all over eastern Australia have been called in to help fight the blazes.

Fire officials are considering the mandatory evacuation of up to 25 townships in the scenic Blue Mountains, west of Sydney.

Forecasts for a return of hot, windy weather later this week has raised fears that three of the most dangerous blazes could join up.

If the blazes join up it will form a massive "mega-fire", according to the New South Wales Rural Fire Service.

The links between the blazes and climate change caused by carbon emissions are complex.

Deadly wildfires have been a perennial problem for Australia.

But a series of record-busting hot, dry conditions across the continent and an early start to the Southern Hemisphere summer has rekindled arguments on mankind's impact on climate and what can be done to mitigate it.

As the fires spread, the pressure is mounting on Prime Minister Tony Abbott, who once described the science around climate change as "absolute crap". 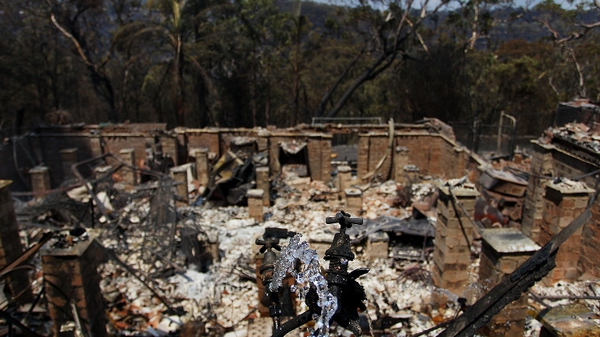