One person has died and up to 200 homes have been destroyed in wildfires near Sydney, Australia.

Thousands have been forced to evacuate their homes and authorities have warned that more homes could be lost as fires burned out of control.

The NSW Rural Fire Service said more than 30 of those fires were not contained.

A 63-year-old man died from a heart attack while trying to defend his home from a fire in a coastal community north of Sydney.

Thousands of people spent the night in evacuation centres on the western outskirts of the city, as well as to the north and the south.

Thick smoke from the fires in the Blue Mountains, west of Sydney, moved across the city over some of its best-known landmarks, including the Sydney Opera House and the Harbour Bridge.

Callers to local radio stations reported ash and burnt leaves falling on some of the city's famous beaches, including Bondi.

Emergency warnings remained in place for fires in the Blue Mountains and the Central Coast, just north of Sydney.

The biggest threat was from a fire in Wyong, 75km north of Sydney, with some homes believed to have been destroyed, the RFS said.

NSW Police and Emergency Services Minister Mike Gallacher said the loss of 200 homes could be considered "lucky" given the magnitude of the threat posed by the fires.

"I suspect given what I saw last night ... I think the potential is most certainly much higher," Mr Gallacher told Australian Broadcasting Corp radio.

Residents said whole streets had been razed in some communities in the Blue Mountains, where schools and businesses were forced to close. 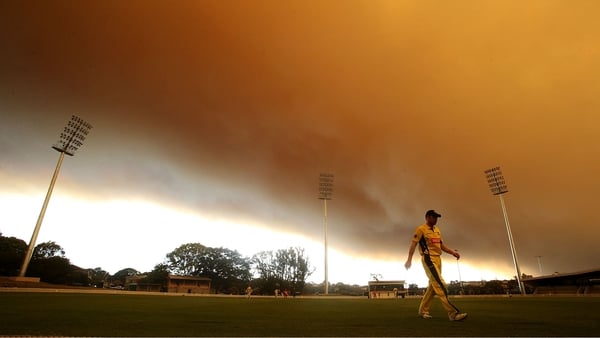