British Prime Minister David Cameron has said companies from all over the world believe that Northern Ireland is a safe and secure place and want to invest there.

The idea of holding an investment conference was discussed earlier this year as Northern Ireland was gearing up to host the summit of G8 leaders in Co Fermanagh.

The main function is being hosted in Belfast's Titanic Building.

Mr Cameron cast himself as a salesman as he made a vigorous pitch for further foreign investment in Northern Ireland.

He told 350 delegates from a range of countries around the world that they would benefit greatly from setting up in what he described as a "very special part" of the UK.

"I make no apology for being a bit of a salesman today," he said.

"I know some people think it's a bit undignified for a prime minister to make a sales pitch. But I am saying that's nonsense.

"So I'm here today with one simple message: put your money in Northern Ireland and be part of this incredible success story.

Mr Cameron also deplored the "tiny minority" whom he said wanted to drag Northern Ireland back into conflict.

Commenting on the relationship between the UK and the Republic, Mr Cameron said politicians should set their sights high because the sky was the limit in terms of the level of co-operation that could be achieved between the two countries.

Earlier, Mr Cameron said that the relationship between the two countries had never been better.

He paid tribute to the Government, which he said had made some bold and difficult decisions to turn the economy around and which seemed to be working.

On the question of whether the mandatory coalition model as operating in Stormont could survive, he said: "I see Peter Robinson and Martin McGuinness working close at hand and they both want the best future for everyone in Northern Ireland.

"But neither of them, nor the other politicians in Stormont want things to go backwards. So it will be tough, but I think they will endure."

Mr Robinson said the development of a vibrant economy was the number one priority of the executive.

He suggested that negative stories in the news did not provide a true picture.

"From time to time the news agenda works against us but in every country, if they were judged by what goes on the news, I am afraid we would have a very skewed understanding of each other's existence," he said.

"Northern Ireland has come a very long way over the past 15 years - politically, socially and economically.

"We have many of the building blocks in place to take our economy to a higher level and inward investment will play a very crucial role."

Mr McGuinness stressed that Northern Ireland was a safe place to do business and hailed the work ethic of local people.

"We have been on a remarkable journey over the course of the last 15 years," he said.

"This represents another stage of this part of our world moving forward in a very dynamic way to provide a better future for all the people we represent." 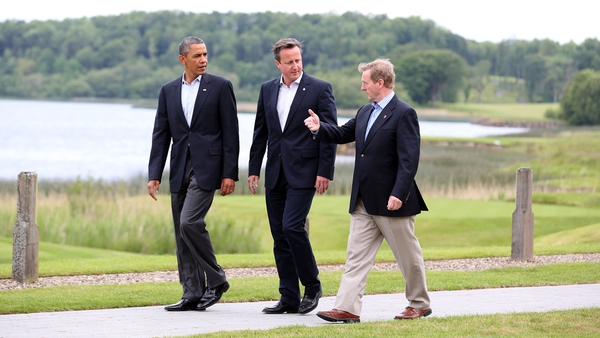