Talks between the White House and US Republicans over the budget impasse have ended with no agreement but with both sides speaking positively afterwards.

President Obama is reported by the New York Times to have rejected a Republican plan that would postpone a possible US default because the proposal would not end the government shutdown.

The talks however were seen as a sign that politicians may be moving towards ending a standoff that has rattled financial markets and thrown the nation’s future creditworthiness into question.

Republicans had offered to raise the debt ceiling temporarily, seen as a significant shift from them in the stalemate driven by their opposition to the president's health care plans.

Extending the government's borrowing authority until possibly the middle or end of November would avert the near-term threat of a default.

The 90-minute meeting between Mr Obama and Republican House leaders was described as a "good meeting" by the White House, at which House Speaker John Boehner explained Republican proposals for a short-term raising of the US debt ceiling.

"After a discussion about potential paths forward, no specific determination was made," said a White House statement.

"The president looks forward to making continued progress with members on both sides of the aisle," it added.

"Hopefully, we will have a clearer path forward," he told reporters, flanked by fellow House Republican leaders on his way from the White House.

The Treasury Department says it will be unable to pay all of its bills if Congress does not raise the $16.7 trillion debt ceiling by 17 October.

Republicans say the Obama administration would be able to keep up with its bond payments at the expense of other obligations if that deadline was missed.

"It would be chaos," he told the Senate Finance Committee.

The Republican plan would postpone that day of reckoning by six weeks, which would give them more time to seek spending cuts, a repeal of a medical-device tax, or other measures they say are needed to keep the national debt at a manageable level.

Democrats have called for a debt-ceiling hike that would extend government borrowing authority for more than a year.

House leaders cancelled a planned recess and said they would remain in Washington next week to keep working on the problem.

With the deadline a week away, Mr Obama is scheduled to meet with House Republican leaders later.

He is also due to meet separately with Senate Democrats and Senate Republicans. 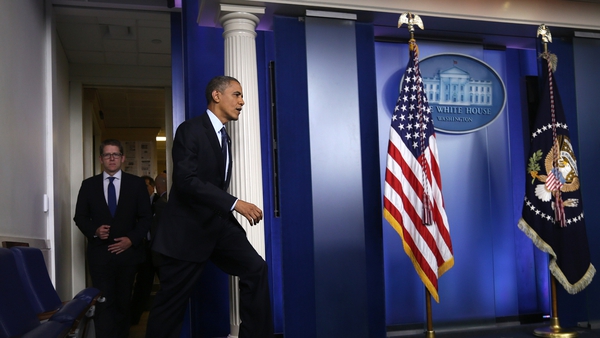