Rough seas have again blocked efforts to recover the bodies trapped inside a boat that sank on Thursday as searches continue by air and sea only.

Divers have been unable to get down to the boat submerged in 47 metres of water less than a kilometre from the shore of the southern island of Lampedusa.

Rescue teams expect to find more than 100 others in and around the wreck.

A delegation of politicians and officials have said that the survivors of a shipwreck off Sicily two days ago live in terrible conditions and face criminal prosecution.

The delegation have called for policy changes at home and in the European Union.

An estimated 300 Eritrean and Somali men, women and children who were seeking a better life in Europe died.

Now the plight of the 155 survivors of one of the worst disasters in Europe's immigration crisis is putting a spotlight on the shortcomings of the centres that house newly-arrived migrants.

It is also putting a spotlight on the laws that are aimed at keeping them away.

Sicily's regional governor Rosario Crocetta said: "We have the duty to tell the Italian government and the EU that their structures and policies are not only inadequate, but they're criminal."

Families can be clearly seen through the front gate camping under a stand of shade trees, with foam mattresses for beds and clothing drying on lines stretched between the trunks.

"The overcrowding is inhuman," said Gea Planeta Schiro, with the Civic Choice party. "More than 100 woman are using one bathroom, and they have no soap to wash their clothes."

The politicians said they spoke to a group of the survivors of Thursday's shipwreck.

The politicians heard that each migrant paid thousands of dollars to smugglers first to cross the Sahara desert, and then to buy passage across the Mediterranean.

Lampedusa is a tiny fishing and tourist island that is only about 70 miles from Tunisia and 170 miles from Libya.

It has borne the brunt of a crisis which over the years has seen tens of thousands of migrants arrive in rickety and unsafe vessels.

He arrived on a boat 12 days ago -about six months after leaving Mogadishu.

Human trafficking is a lucrative business that exists because of the strict laws aimed at keeping unwanted immigrants out of more wealthy countries.

He bought four because he was turned back three times by Libyan police, who shot at him, he said.

"I want to study. I want a future," he told Reuters through the bars of the immigration centre gate.

The survivors of Thursday's shipwreck could be prosecuted,fined €5,000 and sent home if they are not given political asylum, said Agrigento prosecutor Ignazio Fonzo.

"There have been some convictions in the past, and of course they can't pay the fine. They don't have any money," he said.

"This shows that one of next things that Italy's parliament must do is abolish the measure that makes immigration a crime,"Mario Marazzitti, a lawmaker for the Civic Choice party, told reporters.

The disaster has renewed pressure from Italy for more help from the EU to combat the decades-old migrant crisis in the Mediterranean.

Prime Minister Enrico Letta's centre-left Democratic Party called for an urgent meeting of the European Council to agree on setting up special "humanitarian corridors" to provide protection for migrant boats.

The French Prime Minister Jean-Marc Ayrault called for an EU meeting over the death of migrants off Sicily.

"It's a terrible tragedy. It is important that European policy makers meet soon to discuss this together," he told reporters during a visit to the French city of Metz.

The survivors of the boat disaster who wish to pay their respects to the dead who have been recovered will attend a ceremony later today in the airport hangar where the 111 coffins lie in rows on the floor.

Most of the caskets are brown, but the four children lie in white ones, with teddy bears and flowers placed on top.

Some in Eritrea have requested that their family members who drowned be returned home for burial.

Some of the survivors are also helping to identify the dead, she said. 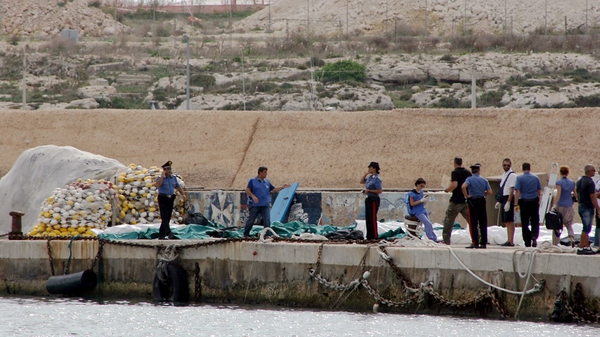