Choppy seas have prevented divers from recovering more bodies of migrants who died in a shipwreck off Sicily that has killed an estimated 300 people.

Rescue teams have so far recovered 111 bodies and expect to find more than 100 others in and around the wreck, submerged in 47 metres of water less than a kilometre from the shore of the southern island of Lampedusa.

After 155 people were pulled from the water alive on Thursday, strong winds and metre-high waves made it impossible for 40 divers to safely collect bodies.

There was little hope of finding more survivors from the almost 500 passengers estimated to have been on board.

"Though the bad sea conditions persist, our guys are ready to go down if a window opens up that makes it safe for them," coastguard spokesman Filippo Marini said.

A black flag bearing the word "shame" was flying over the port, close to a cemetery of rotting boats used by migrants to make past crossings from North Africa.

Lampedusa, a tiny fishing and tourist island halfway between Sicily and the coasts of Tunisia and Libya, has borne the brunt of a crisis which over the years has seen tens of thousands of migrants arrive in unsafe and overcrowded vessels.

Italy is holding a day of mourning today, and schools observed a minute's silence in memory of the victims.

On Lampedusa, gas stations, restaurants and shops were closed and apublic mass was to be held in the evening.

The boat, carrying mainly Eritrean and Somalis, sank in the early hours of Thursday morning after fuel caught fire, triggering a panicked rush to one side of the vessel, which capsized.

Pietro Bartolo, chief doctor at the island's clinic, said were exhausted and dehydrated.

"They are very fragile emotionally, and not only because of the shipwreck, because they are survivors of terrible experiences. Many are fleeing wars and violence in their home countries, and are weary from a long voyage of suffering."

"It took me five months to reach Italy," said the41-year-old Eritrean Abrahal, a survivor from another boat that arrived a few days ago. "I paid $1,600 (to the smugglers) and they put me on an old crate."

On a visit to Assisi, Pope Francis, who has drawn attention to the plight of migrants, said the deaths in Lampedusa underlined the desperation of the poor in a "savage world".

"Today is a day for crying," he said.

In the past 25 years, more than 19,000 people have died trying to reach Italy from North Africa, according to data of known shipwrecks. Many more are likely to have perished in unknown ones. 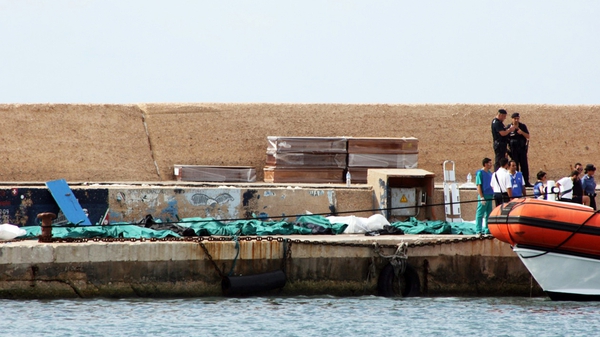 Over 100 people drown, 200 are missing as migrant boat sinks off Sicily