The Health Service Executive is preparing to defer thousands of planned out-patient clinic appointments and planned operations scheduled for next Tuesday.

The deferrals are a result of a planned day of action by non-consultant hospital doctors.

The action will affect up to 12,000 out-patient appointments and 3,000 planned procedures that take place each weekday in public hospitals.

Public hospital services on 8 October will operate as though it was a Sunday.

The HSE is examining the situation on a hospital by hospital basis, as some hospitals with large numbers of Irish Medical Organisation members are expected to be more affected than others.

Emergency department services and other sensitive areas are due to be protected.

The IMO, which has 3,000 junior doctor members, is taking the day of action over what it says are dangerously long hours for NCHDs.

It has refused a request from the Labour Relations Commission and Minister for Health James Reilly to resume talks with the HSE to avert the action.

The union is demanding realistic sanctions against hospitals that fail to reduce long hours.

The HSE has published its detailed eight-page settlement proposals out of the LRC talks on its website.

The main sticking point is the issue of a sanction for hospitals that do not comply with the measures to cut hours.

The IMO wants doctors to be paid for hours worked in excess of a 24-hour shift, plus time in lieu, or paid time, if the time in lieu cannot be taken, as a realistic sanction.

Mr Reilly said he did not want a sanction that leads to a perverse incentive for doctors to work even longer hours.

The HSE said an extra payment is a cost increasing claim and prohibited under the terms of the Haddington Road Agreement, to which the IMO is a signatory.

It has proposed revised sanction proposals, which include, formally recording poor performance on the part of management and withholding a hospital's full budget. 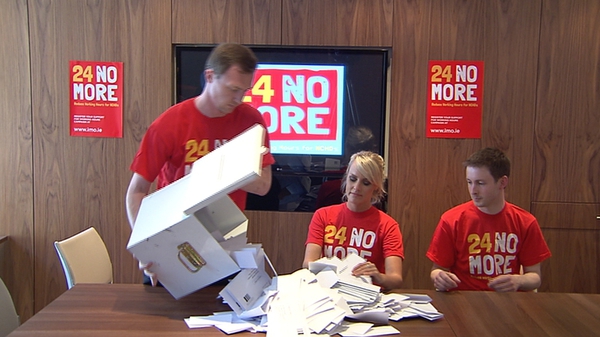 Appeal for IMO to return to LRC talks