Support for the Labour Party has fallen to its lowest level for more than 25 years, according to the latest Irish Times/Ipsos MRBI opinion poll.

When undecided voters are excluded, the poll found Labour support to be 6%, the lowest level since 1987.

At the time of that poll, the party had just emerged from a five-year coalition with Fine Gael.

The survey indicated that Fine Gael is the most supported party with 26%, with Sinn Féin overtaking Fianna Fáil in second place, with 23%.

Fianna Fáil has dropped four points since the last poll in June, to 22%.

Support for independents and others has also risen in the poll, to 21%, while the Green Party was on 2%.

Labour leader Eamon Gilmore said it was a disappointing poll, but other polls published in recent weeks had put support for his party at a much higher level.

Speaking on RTÉ’s Six-One News, Mr Gilmore said he did not believe people would reward Fianna Fáil at the next general election.

He said he did not believe they would reward that party for bringing Ireland into an economic crisis and punish the Labour party for taking the country out of it.

Mr Gilmore denied he was under pressure as party leader.

He said "this is not about me personally" and that he had great support from others in the party, including deputy leader Joan Burton.

Reacting to the poll, Labour's Brendan Howlin admitted "it is a concern".

The Minister for Public Expenditure and Reform said the Labour Party is on a journey to recover the economy, which he said is difficult.

Asked if the poll threatened Mr Gilmore's leadership of the party, Mr Howlin said the Labour team is everyone from grass roots to party leader and they are all in it together.

Donegal County Councillor Frank McBrearty Jnr has resigned from the Labour party saying that the party had broken promises it made to the people of Donegal and Ireland.

Cllr McBrearty joined the party in 2009 and later ran as a Labour candidate in the 2010 by-election in Donegal South West and in the general election of 2011 but was unsuccessful on both occasions.

The Raphoe-based businessman said he will remain in Donegal County Council as an independent and has not decided yet if he will contest the next local elections. 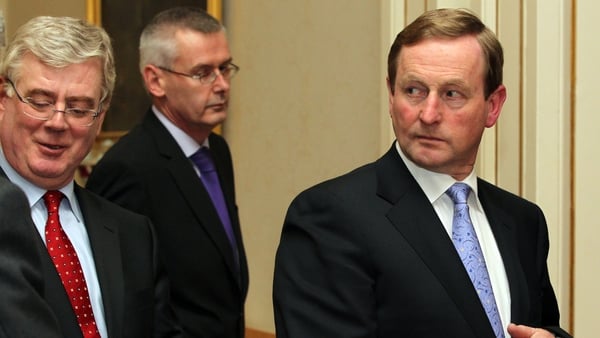