A new opinion poll shows a sharp drop in satisfaction with the Government, the Taoiseach and the Tánaiste and a surge in support for Sinn Féin, Independents and smaller parties.

The Ipsos/MRBI poll for tomorrow's Irish Times shows that Sinn Féin is now the second most popular party in the State.

Support for Fine Gael is down three points to 33%, while Labour drops a substantial six points to 13%.

Fianna Fáil support is down one to 14%, while there is an increase in support for Sinn Féin - up six points to 21%, putting it in second place. Independents and others are also up, by four points, to 19%.

Satisfaction with the Government has also taken a knock since October - it is down 14 points to just 23%, while 73% now say they are dissatisfied with the coalition's performance, an increase of 16 points.

However, satisfaction with Opposition leaders is down as well - Micheál Martin drops five to 24% and Gerry Adams is down three to 29%.

The poll was carried out among 1,000 people on Monday and Tuesday and is the first poll for the Irish Times since last October, taking account of the impact of the Budget and all the controversies over issues such as the Household Charge and water meters since then. 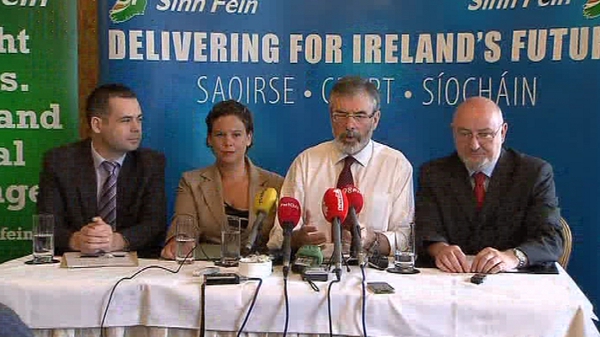