The credit ratings agency Moody's has upgraded its outlook on Irish sovereign debt from negative to stable.

Moody's continues to apply a junk rating to Irish government bonds, but the change in outlook is the first sign that the agency may consider a ratings upgrade.

In a note issued tonight, Moody's said the key drivers of the outlook change were the Government’s progress in restoring solvency to its public finances, and the country's reduced risk of losing access to financial markets because of an improvement in its liquidity.

It notes that Ireland has fully pre-funded its 2014 debt rollover requirement.

It also says its debt and deficit position has improved as a result of the promissory note deal and the extension of the terms of bailout loans from the European Union.

It also notes financial market perceptions about Ireland have shown little reaction to adverse events that were observed in some of the other peripheral countries over the past year, notably in Cyprus.

It sees this as a sign that Ireland is now better insulated from shocks to investor confidence from elsewhere in the euro area.

The agency also lifted its outlook on NAMA debt from negative to stable.

Minister for Finance Michael Noonan said the move was a "welcome development".

He said: "While it’s disappointing that the move was not an upgrade in the rating, it is clearly a step in the right direction."

Moody's is the only major ratings agency to assign junk bond status to Irish government debt.

It has consistently been the most negative of the ratings agencies on the eurozone crisis.

Its last ratings note on Ireland was issued in March, when it affirmed both its junk rating for the country's debt, and its negative outlook, citing the continued vulnerability of the euro area to shocks, and the poor asset quality of the Irish banks, which it says was holding back their ability to lend and support economic growth.

In its latest note, Moody’s says upward pressure on Ireland's sovereign rating could come from the Government continuing to meet its fiscal consolidation targets, producing a primary surplus [which is planned to happen next year] and benefitting from stronger GDP growth.

It expects growth to be supported by stronger growth in the UK and eurozone.

However, it says negative ratings pressure would develop if the country's efforts at fiscal consolidation were to falter, if there were much bigger stresses in the euro area, or if any new losses in the banking sector were expected to be transferred to the Government’s balance sheet.

Of the other major ratings agencies, Standard and Poor's rates Ireland at a low investment grade level of BBB+ with a positive outlook, indicating it is likely to upgrade the rating at its next review.

Fitch also rates Irish sovereign debt at BBB+ with a stable outlook, indicating it may consider an upgrade at next review.

But Moody's has assigned a sub-investment grade rating of Ba1 - two notches below the other agencies.

An investment-grade rating from all three of the main ratings agencies would make Irish debt more attractive to investors, as some funds are prevented from investing in sub-investment grade instruments.

This in turn could lead to greater interest by investors in government bonds, which could help to reduce the Government's cost of borrowing from the markets.

Moody's says the Government is considering the option of getting a €10bn precautionary credit line from the ESM, which it presumes would come into effect in 2014.

It says it expects the monitoring associated with any precautionary line would establish Ireland's eligibility to access the ECB's new bond-buying programme, Outright Monetary Transactions, "if circumstances require it to do so".

Ireland is due to return to full market funding of its sovereign debt at the end of the year, following the completion of a three-year programme funded by the EU and IMF. 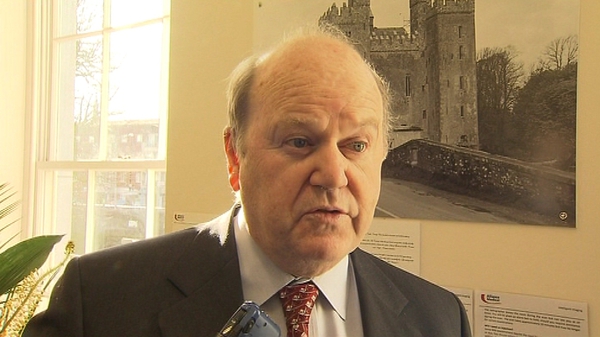