Syrian Deputy Prime Minister Qadri Jamil has said the country's civil war has reached a stalemate and his government is ready to call for a ceasefire.

Mr Jamil said government forces and rebels were incapable of defeating each other.

Speaking to the Guardian newspaper, he said the regime would propose a ceasefire to prepare for a peaceful political process, which would be free from outside interference.

However, he accepted that any ceasefire would have to be kept "under international observation".

"This zero balance of forces will not change for a while.

"In order to realise our progressive reforms we need the west and all those who are involved in Syria to get off our shoulders."

However, Mr Jamil's party has denied that he told the newspaper that President Bashar al-Assad's government was calling for a ceasefire.

The Guardian said its correspondent was standing by his account of the interview with Mr Jamil.

In a letter to the Guardian, a spokesman for the People-Want Party said Mr Jamil was talking in his capacity as leader of the party and not as a member of the Assad government when discussing possible peace negotiations.

The party confirmed Mr Jamil's reference to a ceasefire. However, the party said this did not amount to a government call for a ceasefire as the headline on the report implied.

However, the newspaper reported on its blog that its reporter had confirmed with a translator prior to publication that the comments were made in Mr Jamil's capacity as Deputy Prime Minister and not as party leader.

The Guardian said it was planning to release an audio version of Mr Jamil's comments later today.

In the interview, when asked what proposals his government would make at the forthcoming conference in Geneva, Mr Jamil said: "An end to external intervention, a ceasefire and the launching of a peaceful political process in a way that the Syrian people can enjoy self-determination without outside intervention and in a democratic way."

Mr Jamil also claimed the report by UN weapons inspectors into the use of chemical weapons in Damascus was "not thoroughly objective" and could not be sure it was perpetrated by President Assad's forces.

Elsewhere, US Secretary of State John Kerry has said the United Nations Security Council must be prepared to act on Syria by drawing up a binding resolution next week.

He said there was no time for any more disputes about a UN report on the use of chemical weapons.

"The Security Council must be prepared to act next week," Mr Kerry told reporters in Washington.

"It is vital for the international community to stand up and speak out in the strongest possible terms about the importance of enforceable action to rid the world of Syria's chemical weapons." 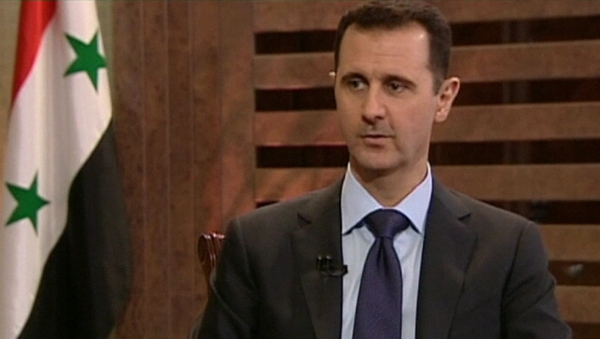 Assad vows to destroy chemical weapons within one year