Looting broke out in the flooded Mexican beach resort of Acapulco as the government struggled to reach tens of thousands of people cut off by flooding.

At least 70 people have died in violent storms that hit the country this week.

Stores were ransacked by looters who carried off everything from televisions to Christmas decorations after floodwaters wreaked havoc in Acapulco.

Tens of thousands of people have been trapped in the aftermath of two tropical storms that hammered vast swathes of Mexico.

More than one million people have been affected, and Acapulco's airport terminal was under water, stranding tourists.

Shops were plundered in the city's upscale neighbourhood of Diamante, home to luxury hotels and plush apartments, where dozens of cars were ruined by muddy brown floodwaters.

Marines were posted outside stores to prevent further theft.

"Unfortunately, it wasn't looting from need of food; it was stealing for stealing's sake," said Mariberta Medina, head of a local hoteliers' association.

"They even stole Halloween and Christmas decorations and an outboard motor."

Northwest of Acapulco in the village of La Pintada, rescue workers have so far recovered the bodies of 18 people killed after a landslide buried their homes, the local mayor said.

That death toll could rise further as locals reported that more than 60 people in the area had gone missing.

Torrential rains were spawned by two tropical storms, Ingrid and Manuel, which converged on Mexico from the Gulf and the Pacific over the weekend, triggering the flash floods.

Manuel strengthened to a tropical storm again on the Pacific coast today, moving northwest toward the Baja California peninsula, the US National Hurricane Center said.

The storm is expected to hit land in about 24 hours and could be close to hurricane strength, the NHC added.

Meanwhile, another area of low pressure over Mexico's Yucatan peninsula had a 70% chance of becoming a tropical cyclone in the next 48 hours, and it was likely to dump more heavy rains across an area already hit by floods and mudslides.

As of Tuesday night, the Interior Ministry said 57 people had been killed by the storms, and another three deaths were confirmed today.

At least ten of the deaths in La Pintada had not been reported until today and it was unclear if any of them were included in the government's earlier total, bringing the total to at least 70.

Since the weekend, the rains have pummeled several Mexican states, with Veracruz, Guerrero, Puebla, Hidalgo, Michoacan, Tamaulipas and Oaxaca among the worst affected.

Landslides have buried homes and a bus in Veracruz on Mexico's eastern seaboard.

Thousands were evacuated from flooded areas, some by helicopter, and taken to shelters. 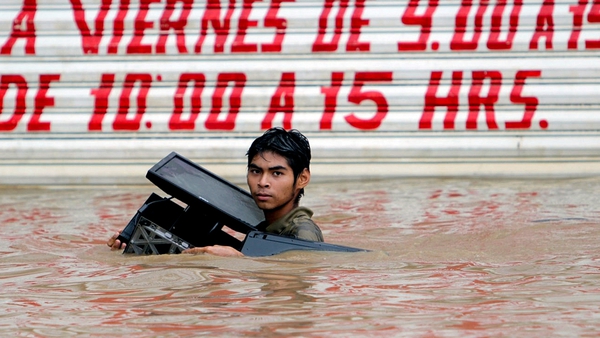 At least 42 people are dead after storms in Mexico