Police in the UK have arrested five people in connection with the fatal house fire in Leicester.

A murder investigation was launched on Friday after Shehnila Taufiq, who was in her 40s, her daughter Zainab, 19, and sons Jamal, 17, and 15-year-old Bilal died in the blaze at a house in Wood Hill.

The husband and father of the deceased, Muhammad Taufiq al- Sattar, is a neurosurgeon who works in a number of hospitals in Ireland including Beaumont Hospital in Dublin.

Earlier, Mr Sattar spoke about the loss of his family in the fire saying he hopes "justice will prevail".

It was the first time Mr Sattar had spoken publicly about the loss of his family.  He said: "I deeply miss my beautiful wife and three beautiful children".

He thanked the local community for its support and the police for their work in investigating the blaze.

It comes as Leicester Police said they are "confident" there is no evidence that the family were involved in the incident on nearby Kent Street where a man was murdered.

Asst Chief Constable Roger Bannister said police are still investigating if there is any link between the two incidents.

Fire broke out in early hours of Friday morning

The cause of the fire that killed the family is being investigated.

The fire broke out at their home in the Spinney Hills area of Leicester in the early hours of yesterday morning.

The mother and her children died in their bedrooms.

Neighbours of the family reacted with disbelief to the idea that they could have been intentionally killed.

One theory emerging locally is that the family may have been the victims of mistaken identity and not the intended targets.

The family is originally from Pakistan and had a home in Ireland for at least 15 years. They were together about a month ago spending the festival of Ramadan in Ireland.

The children moved to the UK with their mother about five years ago for Islamic education but returned regularly to be with their father at his home in Castleknock.

Dr Ali Saleem, of the Islamic Cultural Centre in Dublin, said the family planned to reunite in Ireland after the children finished their education.

Meanwhile, police in Leicester said the victim of the Kent Street murder has not yet been formally identified. 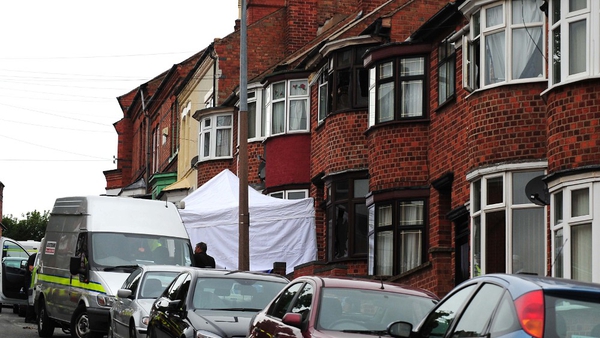