The United States and Russia are "coming to agreement" on the size of Syria's weapons stockpiles, a US official has said.

The talks in Geneva between teams led by US Secretary of State John Kerry and Russian Foreign Minister Sergei Lavrov, which began yesterday, are at a "pivotal point" and are continuing into tomorrow, the official told reporters.

Mr Kerry and Mr Lavrov are meeting in an attempt to reach agreement on details of a plan offered by Russia this week under which Syria would give up its chemical weapons stockpiles, believed to be among the world's largest.

A key first step is to determine the extent of Syria's stocks as a prelude to inspecting, securing and ultimately destroying them.

Mr Kerry said in congressional testimony earlier this week that Washington assesses that Syria has about 1,000 tons of chemical agents. Russia's estimate reportedly has been significantly smaller.

The announcement follows a meeting with international envoy Ladkhar Brahimi in Geneva.

Mr Kerry and Mr Lavrov said they agreed to try to make progress on a broader effort to end the conflict in Syria.

They will meet again in about two weeks' time during the United Nations General Assembly in New York, and hoped progress in Geneva on a chemical weapons disarmament deal would help revive plans for peace conference.

Mr Brahimi has been trying to convene an international conference, known as Geneva 2, to broker a political solution to the Syrian crisis.

Mr Kerry said yesterday that Syria's actions had to be real, comprehensive and timely.

He also said "there ought to be consequences if it doesn't take place", while calling a peaceful resolution "clearly preferable" to military action.

Mr Lavrov said there had to be a move away from military confrontation and the resolution of the chemical weapons issue would make a US military strike unnecessary.

UN chief Ban Ki-moon has said he expects the UN investigators' report will confirm chemical weapons were used in Syria.

Talks between Mr Kerry and Mr Lavrov are part of a diplomatic push that prompted US President Barack Obama to put on hold plans for US air strikes in response to a chemical weapons attack on civilians near Damascus on 21 August.

The US and its allies said Mr Assad's forces carried out the attack with sarin nerve gas, killing more than 1,400 people, including 400 children.

Russia and Mr Assad blame rebel forces for the attack.

"(It) is an important step towards the resolution of the Syrian crisis, this confirms the serious intention of our Syrian partners to follow this path," Mr Putin said.

Syria is one of only five countries not to have agreed to the treaty, which prohibits the production, stock-piling and use of chemical weapons.

Under the treaty, Syria will have to destroy all its chemical weapons.

Mr Kerry expressed some optimism about the talks in Geneva, saying "we do believe there is a way to get this done" and that the US was "grateful" for ideas put forward by Russia to resolve the crisis.

But he and Mr Lavrov differed sharply on US military threats.

"We proceed from the fact that the solution of this problem will make unnecessary any strike on the Syrian Arab Republic," Mr Lavrov said.

Elsewhere, Mr Assad's forces were on the offensive against rebel-held suburbs of Damascus, opposition activists and residents said.

Planes and artillery were bombing and shelling, notably in the Barzeh neighbourhood, where activists said there were also clashes on the ground. 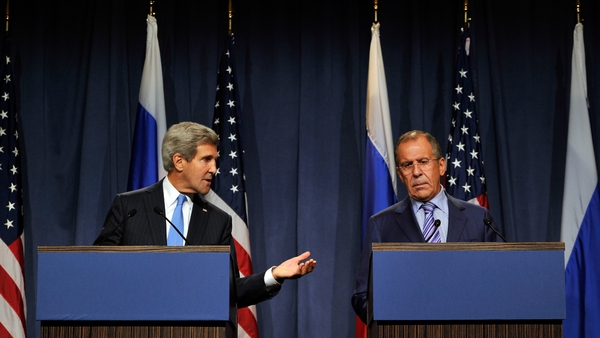 US and Russia begin talks on Syria