The United States and Russia began talks tonight on Russia’s plan for Syria to surrender its chemical weapons.

However, US Secretary of State John Kerry said that US military force may still be necessary if diplomacy fails.

"This is not a game," Mr Kerry said in an appearance with Russian Foreign Minister Sergei Lavrov after opening talks in Geneva aimed at solidifying Russia's plan to secure and dispose of Syria's stockpiles of chemical arms.

The talks were part of a diplomatic push that prompted US President Barack Obama to put on hold his plans for US air strikes in response to a chemical weapons attack on civilians near Damascus on 21 August.

The United States and its allies say Syrian President Bashar al-Assad's forces carried out the attack with sarin nerve gas that killed about 1,400 people, including 400 children.

The United Nations said it received a document from Syria on joining the global anti-chemical weapons treaty, a move Mr Assad promised as part of a deal to avoid US air strikes.

The move would end Syria's status as one of only seven nations outside the 1997 international convention that outlaws stockpiling chemical weapons.

Other holdouts include neighbours Egypt and Israel, as well as North Korea.

Mr Assad told Russian state television in an interview broadcast today that he would finalise plans to abandon his chemical arsenal only when the United States stops threatening to attack him.

Mr Kerry expressed some optimism about the talks in Geneva - expected to last two days – saying: "We do believe there is a way to get this done" and that the United States was "grateful" for ideas put forward by Russia to resolve the crisis.

But he and Mr Lavrov differed sharply on US military threats.

"We proceed from the fact that the solution of this problem will make unnecessary any strike on the Syrian Arab Republic," Mr Lavrov said during the appearance with Mr Kerry.

"President Obama has made clear that should diplomacy fail, force might be necessary to deter and degrade Mr Assad's capacity to deliver these weapons," Mr Kerry asserted.

"Expectations are high. They are high for the United States, perhaps even more so for Russia, to deliver on the promise of this moment," Mr Kerry said, adding that a peaceful resolution was "clearly preferable" to military action.

Mr Kerry said any agreement must be comprehensive, verifiable, credible and implemented in a "timely" fashion - "and finally, there ought to be consequences if it doesn't take place."

Russia has been Assad's most powerful backer during the civil war, which has killed more than 100,000 people since 2011, delivering arms and - with China - blocking three U.N. resolutions meant to put pressure on Mr Assad.

Syria has agreed to a Russian proposal that it give up its chemical weapons stocks, averting what would have been the first direct Western intervention in the civil war.

Several UN diplomats and a UN official told Reuters on condition of anonymity that it was not yet clear that Syria had fulfilled all the conditions for legal accession to the treaty.

Mr Assad said in his TV interview, in comments translated into

Russian: "When we see the United States really wants stability in our region and stops threatening, striving to attack, and also ceases arms deliveries to terrorists, then we will believe that the necessary processes can be finalised."

Mr Assad said Syria decided to cede control of its chemical weapons because of a Russian proposal and not the threat of US military intervention.

Syria is already bound by the separate Geneva accords that have banned the use of chemical weapons in warfare for nearly a century, but it had never been required before this week to disclose whether it possessed them.

A version of the Russian plan that leaked to the newspaper Kommersant described four stages: Syria would join the world body that enforces a chemical weapons ban, declare production and storage sites, invite inspectors, and then decide with the inspectors how and by whom stockpiles would be destroyed.

Mr Assad said Syria would provide an accounting of chemical weapons stocks in 30 days, standard practice under the treaty.

Turkey, one of Mr Assad's fiercest critics, has advocated military intervention in Syria and has grown frustrated over what it sees as Western indecisiveness.

While the diplomats met in Switzerland, the war ground on relentlessly in Syria.

Activists said Syrian warplanes bombed one of the main hospitals serving rebel-held territory in the north of the country, killing at least 11 civilians including two doctors.

Putin: US no longer seen as model of democracy

Russian President Vladimir Putin has said any military strike by the US against Syria "would increase violence and unleash a new wave of terrorism".

In an opinion piece published in the New York Times, he also said the US is increasingly seen as reliant on "brute force" and is cobbling together coalitions under the mantra "you're either with us or against us".

President Putin said the US is no longer seen as a model of democracy by millions around the world.

Referring to the last line of Mr Obama's speech on Tuesday, he said it is extremely dangerous to encourage people to think of themselves as exceptional and added that all people are equal under God.

Mr Putin also speculates that last month's chemical weapons attack near Damascus may have just as easily have been perpetrated "by opposition forces to provoke intervention by their powerful foreign patrons".

Two of the opposition groups have been labelled terrorist organisations by the US State Department, he added.

His comments represent a reminder of how difficult a diplomatic solution to the Syrian crisis is going to be.

UN Secretary General Ban Ki-moon has said he hopes Russia's proposals could help the UN play a more effective role on Syria from now on. 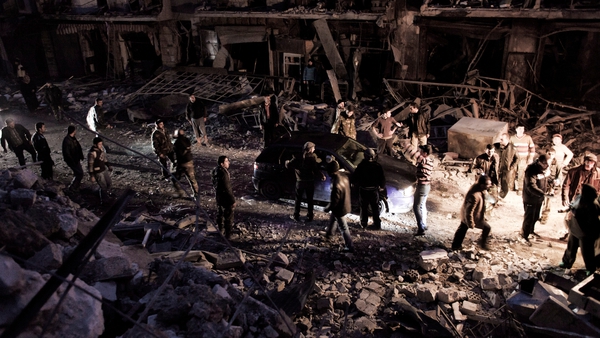