Syria has accepted a Russian proposal to give up chemical weapons and win a reprieve from US military strikes.

The move comes as major western powers began working on a United Nations resolution to create a timetable and process for ensuring it happens.

The United States and its allies remained sceptical and US President Barack Obama sought to keep the pressure on Syria by maintaining his drive for congressional backing for a possible military strike while exploring a diplomatic alternative.

Amid the whirlwind of diplomatic activity focused on the response to a suspected chemical weapons attack on a Damascus neighbourhood on 21 August, the civil war resumed in earnest, President Bashar al-Assad's jets again bombing rebel positions in the capital.

France wants a binding UN Security Council resolution that would provide a framework for controlling and eliminating the weapons and says that Syria would face "extremely serious" consequences if it violated the conditions.

Britain and the United States said they would work on quickly formulating a resolution.

The UN Security Council initially called a closed door meeting asked for by Russia to discuss its proposal to place Syria's chemical weapons under international control, but the meeting was later cancelled at Russia's request.

Moscow, which has previously vetoed three resolutions that would have condemned the Syrian government over the conflict, appeared strongly opposed to the continuation of any military threats to Damascus, as advocated by Washington.

Russian President Vladimir Putin said in televised remarks that the initiative to put Syria's chemical weapons under international control would not succeed unless the United States and its allies reject the use of force against Damascus.

"For this diplomatic option to have a chance of succeeding, the threat of a US military action ... must continue," US Defence Secretary Chuck Hagel told the House Armed Services Committee.

The United States and France had been poised to launch missile strikes to punish Assad's forces, which they blame for the chemical weapons attack. Syria denies it was responsible.

The White House said Obama, British Prime Minister David Cameron and French President Francois Hollande had agreed in a telephone call on their preference for a diplomatic solution, but that they should continue to prepare for "a full range of responses."

Mr Obama was due to meet Senate Democrats and Republicans to present his case for approving a potential military strike.

Secretary of State John Kerry also spelled out the argument in a House hearing and was due to talk by telephone with Lavrov later in the day.

The White House said Mr Obama, who has called the Russian proposal a potential breakthrough, would still push for a vote in Congress to authorise force when he makes a televised address to Americans later on Tuesday.

But the US congressional vote now appeared more about providing a hypothetical threat to back up diplomacy, rather than to unleash immediate missile strikes. A bipartisan group of senior members of Congress was working on a resolution that would take into account the Russian proposal.

Syria's rebels reacted with deep dismay to the Russian proposal, saying it had already emboldened Assad to launch a deadly new offensive and meant that last month's gas attacks would go unpunished.

The proposal provides a way out for Obama to avoid ordering action that is unpopular with Americans, weary after more than a decade of war in Iraq and Afghanistan, and with Congress.

Russia's Interfax news agency quoted Syrian Foreign Minister Walid al-Moualem, visiting Moscow, as saying Damascus had agreed to the Russian initiative because it would "remove the grounds for American aggression".

Mr Assad's warplanes bombed rebellious districts inside the Damascus city limits for the first time since the poison gas attacks.

Rebels said the strikes demonstrated that the government had concluded the West had lost its nerve.

"By sending the planes back, the regime is sending the message that it no longer feels international pressure," activist Wasim al-Ahmad said from Mouadamiya, one of the districts of the capital hit by the chemical attack.

The war has already killed more than 100,000 people and driven millions from their homes. It threatens to spread violence across the Middle East, with countries endorsing the sectarian divisions that brought civil war to Lebanon and Iraq.

The Russian proposal "is a cheap trick to buy time for the regime to kill more and more people," said Sami, a member of the local opposition coordinating committee in the Damascus suburb of Erbin, also hit by last month's chemical attack.

But Damascenes in pro-Assad areas were grateful for a reprieve from Western strikes: "Russia is the voice of reason. They know that if a strike went ahead against Syria, then World War Three - even Armageddon - would befall Europe and America," said Salwa, a Shi'ite Muslim in the affluent Malki district.

French officials said their draft UN resolution was designed to make sure the Russian proposal would have teeth, by allowing military action if Assad is uncooperative.

"It was extremely well played by the Russians, but we didn't want someone else to go to the UN with a resolution that was weak. This is on our terms and the principles are established. It puts Russia in a situation where they can't take a step back after putting a step forward," said a French diplomatic source.

The White House portrayed the deal as a success that vindicated Obama's firm stance.

"We see this as potentially a positive development and we see this as a clear result of the pressure that has been put on Syria," White House spokesman Jay Carney said.

The White House and the Kremlin both said the Russian proposal was not entirely new and that Obama and Putin had discussed the principles behind it in the past. Putin's spokesman said it came up at a summit last week.

With veto-wielding China also backing it, it would be the rare Syria initiative to unite global powers whose divisions have so far blocked Security Council action. Assad's main regional backer, Iran, has also signalled support, as has U.N. Secretary-General Ban Ki-moon.

Gulf Arab states which support the rebels were skeptical, however: "It's all about chemical weapons but doesn't stop the spilling of the blood of the Syrian people," said Bahrain's Foreign Minister Sheikh Khaled bin Ahmed al-Khalifa.

Syria is not a party to international treaties which ban the stockpiling of chemical weapons but is bound by the Geneva conventions that forbid using them in war. Syria has not said whether it possesses poison gas, while denying it has used it.

Elsewhere, Minister for Foreign Affairs Eamon Gilmore said Ireland wants to see accountability for the slaughter and suffering of the people of Syria.

The Tánaiste said the way to do that was through the International Criminal Court.

He said the evidence pointed to their use by the Syrian government regime and welcomed the proposals of yesterday to put Syria's chemical weapons stockpile under international control. 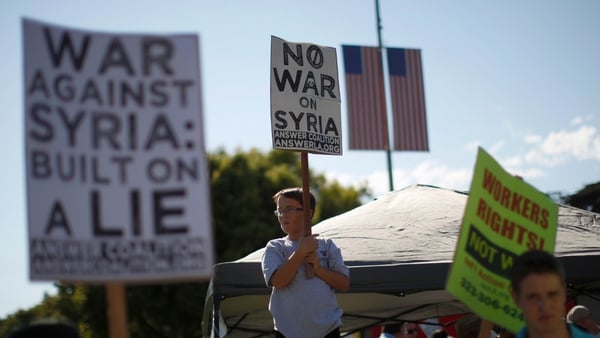