Europe's top officials have warned against a military response in Syria.

The position aligns the EU more closely with Russian President Vladimir Putin than US President Barack Obama in how best to respond to a suspected chemical attack in Syria that killed an estimated 1,400 people.

While describing the 21 August attack near Damascus as "abhorrent" and a crime against humanity, European Council President Herman Van Rompuy said a military strike would not help resolve the crisis.

"There is no military solution to the Syrian conflict," Mr Van Rompuy told reporters ahead of a summit of the Group of 20 countries this week in St Petersburg.

The conflict in Syria is expected to dominate debate along with discussion on the global economy.

"Only a political solution can end the terrible bloodshed, grave violations of human rights and the far-reaching destruction of Syria," Mr Van Rompuy said.

His position, supported by European Commission President José Manuel Barroso, would appear to set the EU at odds with the US, since Mr Obama has said he is prepared to launch military strikes once he has approval from the US Congress, where votes are expected next week.

It also suggests internal divisions within the European Union.

This evening, US ambassador to the UN, Samantha Power said Russia continues to hold the UN Security Council hostage on Syria.

Russian President, Vladimir Putin has said he may be amenable to a common UN approach to the Syrian crisis., however, Ms Power said there was no reason for optimism even after President Putin’s comments.

The ambassador added that she saw no viable path forward at the UN Security Council.

France, which along with Britain is the most influential of the EU's 28 member states on foreign policy, has said it will support any military action taken by the US.

British Prime Minister David Cameron was also keen to support military intervention, but he lost a parliamentary vote on the issue last week and Britain will not now take part.

The position set out by Mr Van Rompuy and Mr Barroso effectively calls for the international community to work through the United Nations in determining the response to Syrian President Bashar al-Assad and his government.

That is not dissimilar to the line adopted by Mr Putin, a firm ally of Mr Assad, who has condemned the US rush to action and goaded US officials for the mistakes made in the invasions of Iraq and Afghanistan.

Mr Putin has also accused NATO of exceeding the bounds of a 2011 UN mandate for intervention in Libya.

Mr Van Rompuy said he had no reason to doubt the credibility of the evidence presented by the US, indicating Mr Assad's forces released the chemical weapons.

However, he said it was essential to wait until UN experts had concluded an on-the-ground investigation into the attack with a report.

"I look forward to the information the UN secretary general will share with us on this matter later today," he said.

"It is important that at least a preliminary repor

t is released as early as possible."

EU foreign ministers meet in Vilnius tomorrow and Saturday, when they will discuss the situation in Syria, among other issues.

US Secretary of State John Kerry will join them and is expected to push the case for military action.

Mr Barroso has said diplomacy, including renewed efforts towards a Syria peace conference in Geneva, is the only way forward.

Earlier, Mr Obama said that he and Japanese Prime Minister Shinzo Abe shared the view that chemical weapons use in Syria was a violation of international law that must be addressed.

Mr Obama and Mr Abe met on the sidelines of the G20 summit.

"I ... look forward to an extensive conversation about the situation in Syria and ... our joint recognition that the use of chemical weapons in Syria is not only a tragedy but also a violation of international law that must be addressed," Mr Obama said.

Mr Abe has refrained from speaking publicly about Japan's stance on Mr Obama's push for military action against Damascus.

He said he looked forward to discussing with the US president ways to improve the situation in Syria.

Mr Obama last night cleared the first hurdle to obtaining Congressional approval for a strike, as the influential Senate Foreign Affairs Committee backed the use of force by a margin of ten to seven, moving the measure to a full Senate vote next week.

The proposal allows the use of force for 60 days, with the possibility of a 30-day extension.

Mr Obama has said he is confident of receiving approval from Congress for "limited and proportionate" military action, which he said would not involve US troops putting "boots on the ground" in Syria.

Mr Assad had flouted a chemical weapons ban enshrined in treaties signed by governments representing 98% of the world's population, he said, adding: "I didn't set a red line. The world set a red line."

Tánaiste and Minister for Foreign Affairs Minister Eamon Gilmore has said that any response to the suspected chemical weapons attack had to be done through the United Nations.

Speaking on RTÉ's Morning Ireland, Mr Gilmore said he accepted that there were frustrations over the failure of the UN Security Council to reach a common position on how to deal with the events of 21 August.

He said the 28-month conflict in Syria had led to an "appalling human crisis".

He said: "Anybody who saw the condition of children who were injured, burned, killed by the use of chemical gas and chemical weapons cannot but have been moved. There is a necessity for a response to that, but I think the response has to be through the United Nations."

Mr Gilmore said he took "some comfort" from what appeared to be a suggestion from Mr Putin that he may be amenable to a common UN approach to the Syrian crisis.

He said that the world needed to concentrate on the humanitarian crisis in Syria while also working towards a political solution in the country.

Mr Gilmore said Ireland was now one of the biggest contributors to that aid on a per-capita basis. 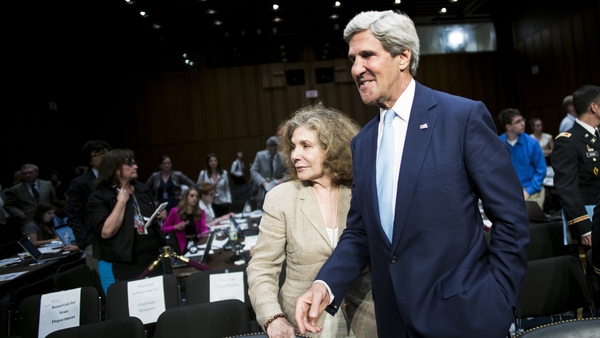 US Senate committee backs use of force in Syria