US President Barack Obama's effort to win legislative backing for military strikes against Syria has passed its first hurdle after a Senate committee voted in favour of the move.

However, the narrow margin of victory showed the depth of US caution.

The US and Russia, Syria’s main backer, remained publicly at odds as Mr Obama tried to build his case for military action over chemical weapons before flying to Russia for a G20 summit hosted by President Vladimir Putin tomorrow.

Mr Putin said US congressional approval without a UN Security Council resolution would be an act of aggression.

He accused US Secretary of State John Kerry of lying by playing down the role of the militant group al-Qaeda with rebel forces.

With Mr Obama focused on building international support, administration officials kept up their campaign of persuasion in Congress, where deep US scepticism about going to war was reflected in a House of Representatives hearing.

Still, after much debate over the exact wording, the Senate Foreign Relations Committee approved a resolution authorising the use of military force in Syria in a vote that avoided party lines, with Democrats and Republicans on both sides.

The action cleared the way for a vote in the full Senate, likely next week.

The committee voted 10-7 in favour of a compromise resolution that sets a 60-day limit on any engagement in Syria, with a possible 30-day extension, and bars the use of US troops on the ground for combat operations.

The authorisation still faces significant resistance in Congress, where many politicians fear it could lead to a prolonged US military involvement in Syria's civil war and spark an escalation of regional violence.

The full Senate is expected to vote on the resolution next week.

The House of Representatives also must approve the measure.

Mr Obama said he would continue to try to persuade Mr Putin of the need for punitive strikes on Mr Assad for using chemical weapons when the two meet in St Petersburg.

In Stockholm en route to Russia, Mr Obama said the credibility of America and of the world was at stake.

He appeared to take umbrage at a reporter's question about the "red line" he set for Mr Assad at an August 2012 White House news conference.

He accused Mr Kerry outright of lying when, in urging Congress to approve strikes on Syria, Mr Kerry played down the role of al-Qaeda in the rebel forces.

"Al-Qaeda units are the main military echelon, and they know this," Mr Putin said.

Earlier, Mr Putin had said in a pre-summit interview with the Associated Press that he could not absolutely "rule out" Russia supporting a UN Security Council resolution to punish Mr Assad - if it could be proved he had used poison gas.

Briefing members of Congress in Washington, Mr Kerry said those comments were "hopeful" and "there may be a road forward where Russia would consider not blocking action".

Mr Kerry played down concerns that any US military strike over chemical weapons might provoke a clash with Russia.

"Foreign Minister [Sergei] Lavrov has made it clear ... Russia does not intend to fight a war over Syria," Mr Kerry told a hearing of the House Foreign Affairs Committee.

A senior western official said that while Russia was unlikely to say so in public, there were signs Russian officials believe Mr Assad was responsible for the deaths on 21 August and that it had strained Russian support for him - providing an opening for a new, concerted drive to end the conflict.

However, Mr Putin's characteristically blunt tone towards the US position appeared to limit prospects for a breakthrough in a stalemate that has prevented international action to rein in a conflict that has killed more than 100,000 Syrians and left millions homeless but which neither side has been able to win.

Numerous defections over the past two years by senior commanders, either to the rebel Free Syrian Army or into exile abroad, have not led to a collapse of Mr Assad's defences.

Mr Habib, the former defence minister, had been under house arrest since he resigned in protest at Mr Assad's crackdown on demonstrators in 2011.

Other sources also said Mr Habib had fled but Syrian state television denied he had left his home.

Turkey's foreign minister said he could not confirm the general had defected.

The flight of Mr Habib, if confirmed, would lend credibility to suggestions that parts of the Alawite community may be turning against Mr Assad.

"Ali Habib has managed to escape from the grip of the regime and he is now in Turkey, but this does not mean that he has joined the opposition. I was told this by a western diplomatic official," Mr Labwani said from Paris.

A Gulf source said that Habib had crossed the Turkish frontier late last night with two or three other people. He was taken across the border in a convoy of vehicles.

Mr Kerry said he did not know if the report of Mr Habib's defection was correct but "there are currently defections taking place. I think there are something like 60 to 100 in the last day or so, officers and enlisted personnel".

In an interview on Britain's Sky News, Bouthaina Shaaban, a senior adviser to Mr Assad, made no mention of the defection.

She said the world should wait for the outcome of a United Nations investigation into the use of chemical weapons and blamed groups linked to al-Qaeda for the alleged gas attack last month. 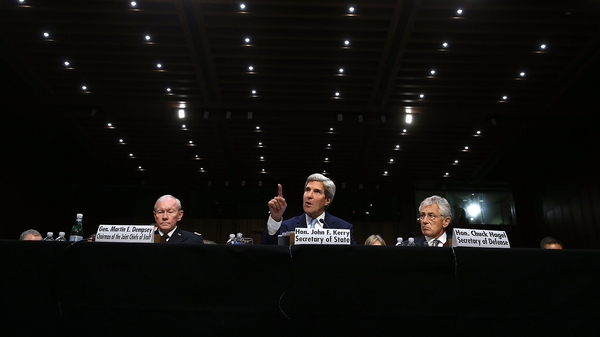 Kerry refuses to rule out use of troops in Syria