Syrian President Bashar al-Assad has denied allegations that his forces were behind chemical attacks in Damascus last month.

He warned that any French military action against his government would trigger negative repercussions.

"Those who make accusations must show evidence. We have challenged the United States and France to come up with a single piece of proof.

"[Presidents] Obama and Hollande have been incapable of doing so," Mr Assad told the French daily Le Figaro in an interview.

"Anybody who contributes to the financial and military reinforcement of terrorists is the enemy of the Syrian people.

"If the policies of the French state are hostile to the Syrian people, the state will be their enemy," he said.

"There will be repercussions, negative ones obviously, on French interests."

Meanwhile, the United Nations has said that nearly seven million Syrians have been displaced by the civil war, which is almost one third of the population.

Another two million had sought refuge in the neighbouring countries of Lebanon, Jordan, Turkey and Iraq.

More refugees are expected to leave the country in advance of an anticipated airstrike by the US military following what it said was a chemical weapons attack the US blames on President Assad's forces.

Lebanon has around one million people, either refugees who have formally registered, or others who have moved into employment, or who have enough resources of their own not to declare themselves refugees.

The influx is putting a strain on Lebanon's meagre resources, according to the International Crisis Group.

Meanwhile, NATO Secretary-General Anders Fogh Rasmussen has said he has seen evidence about the chemical weapons attack on 21 August that convinced him the Syrian authorities were responsible.

He said: "I have been presented with concrete information and, without going into details, I can tell you that personally I am convinced, not only that a chemical attack has taken place, but I am also convinced that the Syrian regime is responsible."

However, Russian Foreign Minister Sergei Lavrov has dismissed evidence presented to Russia by the US linking Mr Assad's forces to the attack, which the US said killed more than 1,400 people.

Mr Lavrov said the evidence did not contain anything concrete.

China has said it is seriously concerned about any unilateral military action against Syria.

Foreign Ministry spokesman Hong Lei said no side should rush to pre-judge the results of the investigation by UN chemical weapons experts.

In the US, President Barack Obama and his top aides are making a major push to persuade politicians to back a resolution supporting military action against Syria.

The US Senate will hold public hearings while the House of Representatives will begin its debate next week.

A closed-door briefing by White House officials for around 100 politicians took place on Capitol Hill yesterday.

More classified briefings will be held this week and two Senate committees will hold public hearings.

Blix warning for US

Former UN chief weapons inspector Hans Blix has said the US should remember that they would be in violation of a UN charter if they were to intervene using military force in Syria.

Speaking on RTÉ's Today with Seán O'Rourke, the chairman of the Weapons of Mass Destruction Commission said: "The US ought to recognise that there is a UN charter which they have subscribed to and which they sometimes invoke.

"One should also recognise that going it alone with a military intervention when it is not a case of defence against aggression, or against the country itself, or it is not a case of authorisation by the Security Council is a violation of the UN charter."

Mr Blix said an alternative way to prevent further violence would be for countries to stop providing forces in Syria with weapons and other resources.

He said: "Authorising the use of armed force and shooting at Assad is not the only reaction that is possible.

"This would be an intervention yes, but the belligerent part in the struggle is that this could not go on if they weren't supplied by weapons and money on the outside.

"We reported that Saudi Arabia, Qatar, maybe Turkey, Russia, Iran, and America provide intelligence. These are the countries that keep the war going." 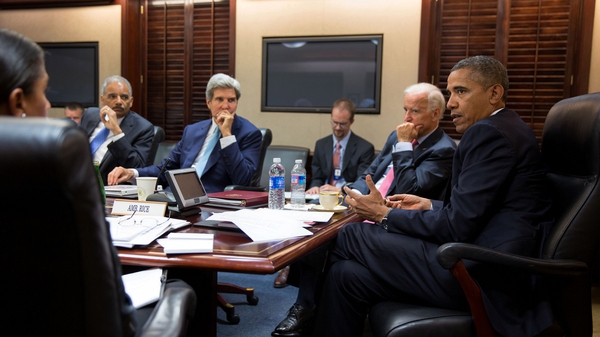