The British government has lost a vote on a motion to support plans for military intervention in Syria.

The motion was defeated by 285 to 272 votes in major blow to Prime Minister David Cameron.

Mr Cameron said it was clear that parliament "does not want to see British military action" in Syria after the Government was defeated on the issue.

He said: "I strongly believe in the need for a tough response to the use of chemical weapons.

"But I also believe in respecting the will of this House of Commons.

"It is very clear tonight that while the House has not passed a motion, it is clear to me that the British parliament, reflecting the views of the British people, does not want to see British military action.

"I get that and the Government will act accordingly."

Defence Secretary Philip Hammond told BBC's Newsnight the US would be disappointed by the result.

He said: "We are now clear that we are not now going to be part of any military action - that probably means we will not be part of any planning or discussion.

"It is certainly going to put a strain on the special relationship. The Americans do understand the parliamentary process that we have to go through.

"They have always understood that in order to be involved in military action we would have to secure the consent of parliament."

The House of Commons had spent the day debating the motion, which said military action could not be sanctioned until after weapons inspectors have reported to the United Nations Security Council.

During the debate, Mr Cameron said the use of chemical weapons in Syria represents a war crime.

Labour leader Ed Miliband said he was not ruling out military intervention, but the potential consequences of such action needs to be clear.

Mr Cameron had already been forced to water down his stance by accepting Labour demands that direct British involvement would require a second vote following the investigation by the inspectors.

But the concession was not enough to win over enough coalition MPs, conscious that public opinion is heavily against any intervention and wary of the decade-long controversy over the Iraq war.

The five permanent UN Security Council members met on Syria again in New York this evening, but it has been reported that no progress was made.

Meanwhile, the White House said any US response to chemical weapons use in Syria would be limited and rejected comparisons with the US-led war in Iraq.

White House spokesman Josh Earnest reiterated that President Barack Obama would make his decision on a response based on national security interests.

Mr Obama has spoken with German Chancellor Angela Merkel about the situation.

Mr Earnest said the US would also provide its own legal justification for an eventual response to chemical weapons use in Syria if necessary once Mr Obama decides how to proceed.

He said the Obama administration is still on track to release details of an intelligence report aimed at showing why the US is certain the Syrian government was behind the chemical weapons use.

The team is in its third day of investigations into an apparent poison gas attack in the area last week, which killed hundreds.

The group arrived in the eastern suburb of Douma and examined the sites where activists say rockets loaded with chemical weapons struck.

Activists said the team ran more tests and conducted interviews with the wounded.

UN Secretary-General Ban Ki-moon has said the UN team will continue its investigations until tomorrow and will report to him afterwards.

Mr Ban also said he had spoken to Mr Obama yesterday about the situation in Syria.

Syria vows to defend itself

President Bashar al-Assad has said Syria would defend itself against any aggression.

"The threats of direct aggression against Syria will only increase our commitment to our deep-rooted principles and the independent will of our people", state television quoted Mr Assad as telling a delegation of Yemeni politicians.

"Syria will defend itself in the face of any aggression," he added.

One of Syria's closest allies, Russia, is reported to be sending two ships to the east Mediterranean to strengthen its naval presence because of the "well-known situation".

Interfax news agency quoted a source in the general staff of the armed forces as saying an anti-submarine vessel and a missile cruiser would be sent because the situation "required us to make some adjustments" in the naval force.

President Assad's forces appear to have evacuated most personnel from army and security command headquarters in Damascus in preparation for a Western military strike, residents said.

US-led air or missile strikes on Syria look all but certain after the US, European and Middle Eastern allies blamed a suspected poison gas attack on Mr Assad's forces.

However, no significant movement of military hardware has been reported, possibly due to heavy fighting near major highways, one of the sources added.

Armoured vehicles and trucks carrying troops were seen leaving the Damascus International Airport area, which includes three army bases, and heading toward the nearby town of Harran al-Awamid, opposition activist Ma'moun al-Ghoutani said by phone from the area, adding that lights had been turned off at the airport.

Among the buildings that have been partially evacuated are the General Staff Command Building on Umayyad Square, the nearby airforce command and the security compounds in the Western Kfar Souseh districts, residents of the area and a Free Syrian Army rebel source said.

Opposition activists in the Mediterranean port city of Latakia said several Syrian navy vessels had docked alongside commercial ships at piers reserved for civilian traffic, apparently to lessen the likelihood of being identified and hit. 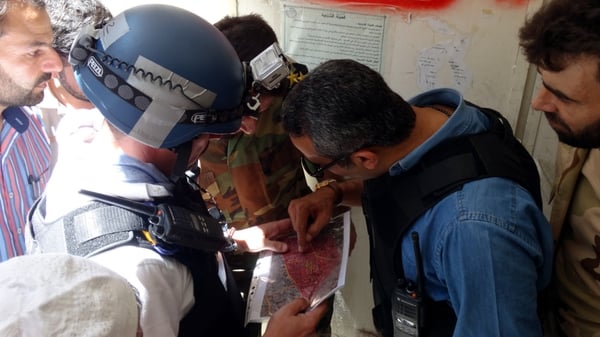