US Secretary of State John Kerry has said the use of chemical weapons in Syria was large-scale and indiscriminate.

Mr Kerry said the use of such weapons in Syria "is real and it is compelling" and the evidence for their use is "based on fact".

He said President Barack Obama believes there must be accountability for the use of the "world's most heinous weapons".

Mr Kerry added that Syria's refusal to allow access and its shelling of attack sites in Damascus are signs the regime has something to hide.

The information so far, including videos and accounts from the ground, indicate "that chemical weapons were used in Syria".

"Moreover, we know that the Syrian regime maintains custody of these chemical weapons," Mr Kerry said.

"What we saw in Syria last week should shock the conscience of the world.

"Let me be clear: The indiscriminate slaughter of civilians, the killing of women and children and innocent bystanders by chemical weapons is a moral obscenity.

"Our sense of basic humanity is offended not only by this cowardly crime, but also by the cynical attempt to cover it up."

They crossed the frontline from the centre of Damascus, which remains under Mr Assad's control, to inspect the Mouadamiya suburb.

Mouadamiya is one of at least four neighbourhoods attacked last Wednesday before dawn.

Before the visit, the UN said one vehicle in its convoy was crippled by gunshots fired by "unidentified snipers".

The team continued on after turning back for a replacement car.

Syrian state television blamed rebel "terrorists" for the shooting. The opposition blamed it on pro-Assad militiamen.

An opposition activist said members of the Free Syrian Army and the opposition's Mouadamiya Local Council accompanied the inspectors on their tour of the suburb.

Video filmed at the site showed inspectors in black and blue body armour and blue UN helmets walking through a street as curious onlookers came up to watch.

They shook hands with men who appeared to be rebels wearing camouflage vests, and were accompanied by doctors and local residents.

The group descended into the basement of a building where they were told injured survivors were being treated below ground to protect them from more shelling.

Another video showed an inspector interviewing a patient and taking notes.

Activists say at least 80 people were killed in Mouadamiya when the district was hit with poison gas. Hundreds of people were also killed in three other rebel-held districts - Irbin, Ain Tarma and Jobar.

The inspectors later returned to their hotel, and within an hour residents reported that the shelling of Mouadamiya resumed.

The inspectors had been stuck in a downtown luxury hotel since the attack, waiting five days for government permission to visit the scene a few kilometres away.

They had arrived three days before the incident, with a mandate to investigate earlier, smaller reports of chemical weapons use.

The US and its allies say they worry that the time that has elapsed, and continuous shelling by Mr Assad's forces against the affected areas, could make it impossible for the inspectors to collect evidence.

The United Nations said Secretary-General Ban Ki-moon was confident the team could get the data it needs.

White House spokesman Jay Carney said this evening that Mr Obama is evaluating the appropriate response to the use of chemical weapons, but has made no decision on how to respond.

A spokesperson for US House of Representatives Speaker John Boehner has said Mr Boehner told the White House that it must consult the Congress before taking any action on Syria and it must have clearly defined objectives.

Mr Obama, Mr Cameron and French President Francois Hollande all spoke to each other and to other allies in the past few days in a flurry of phone calls.

Several NATO countries have issued statements pledging a response, although none has been specific about what is planned.

Top military officers of the US, Britain, France, other NATO allies and the main anti-Assad countries in the region, including Saudi Arabia and Turkey, met in Jordan to discuss Syria.

Earlier, Russian Foreign Minister Sergei Lavrov said any military intervention in Syria without a mandate from the UN would be a grave violation of international law.

Mr Lavrov appealed at a news conference to the US and other Western powers to avoid "past mistakes" by intervening in Syria following accusations by rebel forces that Syrian government forces used chemical weapons against them.

Director of Médecins San Frontieres in Ireland Jane-Anne McKenna said the hospitals it works with in Syria did not have sufficient stocks of the drug required to treat the patients affected by last week's attack.

Speaking on RTÉ's Morning Ireland, Ms McKenna said MSF is working to re-stock hospitals with atropine to allow them to respond adequately in the case of further attacks.

Ms McKenna re-confirmed that three hospitals in Damascus that work with MSF treated 3,600 patients who were exposed to neuro-toxic agents, of which 355 subsequently died.

Ms McKenna said the scale of the attack "overwhelmed" the medical facilities, and healthcare workers who were treating victims became contaminated.

In one of the hospitals, over 70% of heathcare workers became contaminated, and one died as a result. 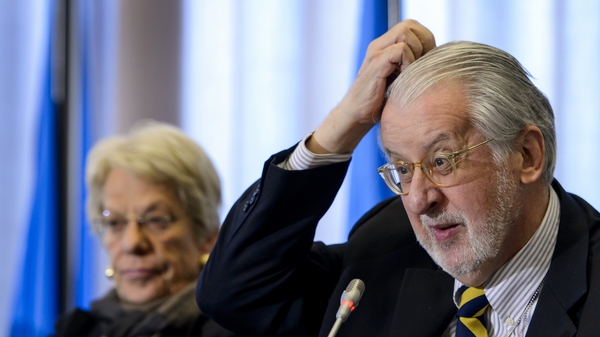